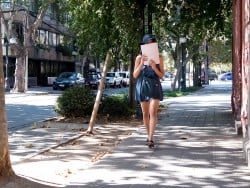 If you are ready to panic over the next over-hyped non-issue, then I have just the thing.

Citing an AP story titled Emergency room visits from distracted walking skyrocket, Teleread informed us this morning that walking while reading ebooks on your smartphone is a danger to your health:

According to a recent National Safety Council report aired on CBS News, up to 10 percent of U.S. emergency room admissions are now attributable to distraction while walking. The situation is now so serious that, according to the NSC’s recent release, “distracted walking injuries involving cell phones accounted for an estimated 11,101 injuries between 2000 and 2011, making it a significant safety threat. The trend is so alarming that it was included for the first time in the annual National Safety Council statistical report, Injury Facts.”

Triumphant Luddites might like to reflect that paper books and tranquil reading surroundings like libraries may carry their own dangers. But as Chris writes elsewhere, we should probably take those dangers less seriously than the genuine, and quantifiable, risk of ebook-related distracted walking.

This sounds like a lot of injuries, making distracted walking a dangerous activity, right?

A quick check of the statistics tells us that this is a non-issue on par with people choking on pretzels or getting attacked by vending machines.

Yes, some people have been injured while distracted by their mobile device. We’ve all chuckled over the videos, and some of us have counted ourselves lucky that no camera was watching us when we were paying too much attention to our smartphone. But in reality, this is less of a problem than the mainstream media would have you think.

For one thing, this problem existed decades ago, and extends beyond mobile devices (I’ve walked into street signs while reading paper books). But more importantly, this type of injury simply doesn’t happen all that often.

In 2011 alone, the CDC documented 40 million emergency room visits caused by injuries (out of 136 million visits).

We do not know the causes of the injuries which lead to the 40 million visits, but we do know that the NSC estimated that only 2,100 people were injured in 2011 while walking and using their cellphone. And while we don’t know how many of those 2,100 injuries ended up seeking medical care, that matters less than the fact that there is a couple of orders of magnitude difference between one statistic and the other.

In short, this is not a real public health/safety issue so much as it is a meaningless distraction, a piece of entertaining gossip gussied up as news.