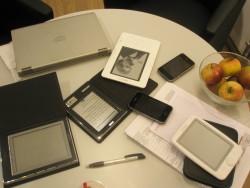 After the US and the UK, Germany boasts one of the most developed ebook markets in the world, but as a recent survey reminds us, the printed book still dominates.

Yougov released a survey last week on media consumption in Germany. I’m still looking for the original source, but The Local reports:

Over half of Germans read a book at least once a week, whereas around one in five use movie streaming services and only 17 percent read ebooks.

Still, reading a book still wasn’t Germany’s most beloved pastime, with watching the television still way out ahead of the pack – 89 percent of Germans still sit in front of the telly at least once a week.

In terms of what Germans like to buy for entertainment, the written word came out on top.

Previous surveys have said reported that a quarter of Germans had read on ebook in the past year, and given the different time frames it is hard to say whether the new report indicates an increase or decrease.

But one thing we do know from this survey is that the paper book buyers still outnumber the buyers of ebooks; Yougov reported that 53% of Germans said they’d bought themselves a book, and that 38% had bought a book as a gift,  over the last six months.

That is far larger than the (estimated) 2.9 million Germans who have bought an ebook in the past year, but that should come as no surprise given that we already knew that the print book market far exceeds the ebook market in Germany and everywhere else in the world.

In any case, books are still important to German consumers. Thirteen percent of respondents said books weren’t important to them, while 40% said they could do without streaming services like Spotify and 48% could live without audiobooks.