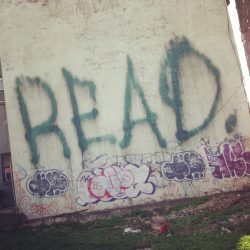 Gallup took another of its tetradecennial looks at American reading habits in December, and last week it released the data.

In spite of the increase in digital distractions, Americans are reading about as many books as they were fourteen years ago.

Highlights of the report include:

Although the survey did not track the types of books that Americans read by age group, book reading in general is fairly similar by age group among U.S. adults. It is a bit more prevalent among the oldest and youngest age groups than among those in the middle years. Roughly nine in 10 adults aged 18 to 29 (91%) report reading at least one book in the past year — possibly related to the required reading among college students within this age group. The percentage among those aged 65 and older is 85%. Nearly four in 10 respondents in both age groups say they read more than 10 books.

The most meaningful differences in reading behavior since 2002 are evident among Americans aged 65 and older. Collectively, they are reading more books than the same age group did in 2002. The percentage reading one or more books increased from 68% to 85%, including a four-percentage-point increase in those reading 11 or more, from 33% to 37%.

You can find more data on gallup.com, and discussion on The Passive Voice.

Given the gap between one poll and the next, this report isn’t going to be of much use. So much as changed in the past 4 years, much less 14 years, that this type of survey is only marginally relevant in 2017.

Like the Pew Research center, Gallup is asking the wrong questions. They shouldn’t be asking about only about books but instead poll readers on genre, length, and format. These polls treat comic books, novels, and eSingle ebooks as identical content while at the same time ignoring websites, short stories, digital magazines, articles saved in Pocket, etc.

It is past time for this book snobbery to end, and for pollsters to stop treating books like they are the only content worth asking about.