Here’s something I never expected to happen.

Announced last summer, the Gvido is a sheet music reader based on two 13.3″ E-ink screens. It’s not the first device designed to display sheet music (both E-ink and Plastic Logic have shown off concept designs, and another startup even announced a similar product, the Zephyr) but the Gvido is going to be the first to reach the market. 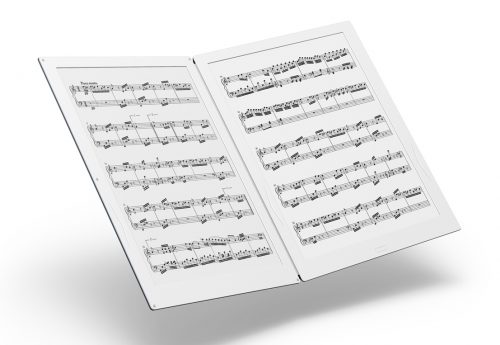 The Gvido website was updated recently with the new details about the device.

Edit: And the site was updated a few days later. Some details were changed, some were removed, and others added. The changes have been noted in the text of the post.

According to the FAQ, the developers have completed a second-gen prototype, and plan to have the Gvido on the market in Japan, Europe, and America this summer:

For the hardware, we have the final design and it’s being Mass produced. For the software, it’s under development by increasing the member to produce better one. … We are making great effort to be ready in mid 2017.

Weighing in at 660 grams, the production unit is slightly heavier than the original prototype but is relatively the same size. It has 8GB storage, a microSD card slot, and wifi, but is missing the Bluetooth mentioned in the original announcement.

It’s designed to work with a foot pedal (wired or wireless) although it’s not clear how that will work without Bluetooth. (Edit: the spec list says no BT, but the press release mentions Bluetooth.)

As for software, the Gvido supports only PDF, but it will let them edit the sheet music:

And as for the price, the latest word is that this is going to be an expensive little bugger:

The final price hasn’t yet set. Since it has 2 large scale E-INK monitors, the price of the first model is expected to be slightly higher than two of iPad Pro 12.9 inches. It’s getting slightly higher because of the new components though, We try hard to keep it as low as possible.

The price will probably go down a little when the Gvido officially goes up for pre-order, but I would be incredibly surprised if the price cracks $1,000.

After all, the two E-ink screens alone cost close to $500 each, and that doesn’t include the cost of the shell, electronics, or assembly.

At best, this is going to be an incredibly expensive device that makes the Sony DPT-S1 look moderately priced.