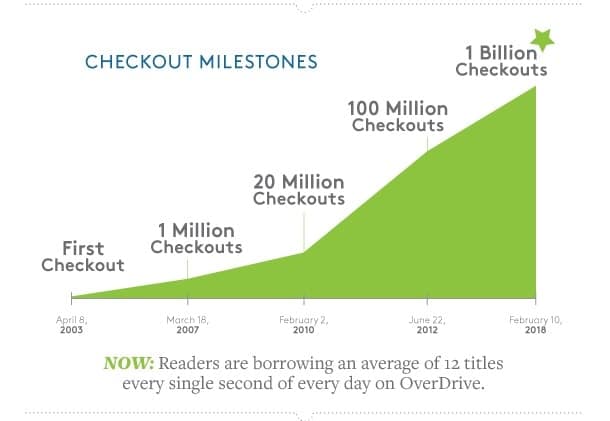 Overdrive just announced on their blog that they have loaned a billion ebooks since they first started lending ebooks in 2003.

One billion. It’s a defining number that’s hard to fathom yet understood as a massive milestone. There are very few things that can use the number 1 billion to describe what they represent. Recently, digital library checkouts through OverDrive became one of them. On February 10, Team OverDrive watched as our all-time checkouts surpassed 1 billion, officially joining the three comma club.

We’re proud of this accomplishment, but it’s not something we ever could’ve reached on our own. The librarians and staff at the 40,000 library and school partners we work with around the world deserve all the credit for spreading the word and evangelizing the joys of digital reading. Because of their tireless work, this isn’t the end of a journey, but rather the first step toward billions more moments of reading happiness. At PLA this week, we’ll be celebrating our Billion Book Bash with hundreds of our closest librarian friends. If you’ll be in Philadelphia for the conference, we hope you’ll join us.

A billion is a lot, but I think it’s worth noting that OverDrive would have reached this milestone years ago if the major publishers had adopted reasonable policies on library ebooks.

All 5 of the major publishers either charge ridiculously high prices in the ebook market, or limit checkouts, or both.

If they had had their way we would never have reached this milestone.