language sources have reported that Amazon has been quietly negotiating with Swedish publishers, and that the retail giant is planning to launch a local Kindle Store in Sweden in early 2014.

And in addition to Svenska Dagbladet, there was a new article in Dagens Nyheter on Saturday. The article cites numerous sources in the Swedish publishing industry, including Christer Perslöv, the CEO of the publishing services company Bokrondellen. All are saying that Amazon is negotiating with publishers and distributors, with Perslöv stating that negotiations with his firm had been ongoing for a year.

Update: A reader left a comment with a better translation: "Bokrollenden is owned by all the biggest publishers and therefore has a monopoly-like position for book data there. They say Amazon has come closer in negotiations to Bokrollendens demands, before that Amazon had set “tough demands”. Both p and ebooks have been discussed." Thanks, Jussi! 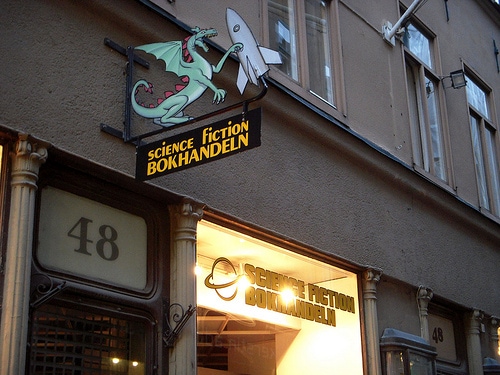 While no one has any solid info on when Amazon will launch in Sweden, the general consensus is that it will happen early next year. And from the way some of the sources are talking, Amazon might also be interested in selling pbooks as well as ebooks.

Aside from that last detail, none of this comes as a surprise to me; back in September 2013 I was the first to report on Amazon adding new language support to KDP, including Swedish. I suggested that the new support indicated that Amazon was interested in launching more local Kindle Stores.

Right now there are exactly 2 international ebookstores in Sweden, iBooks and Google Play Books. Apple launched there in September 2011 and Google expanded into the country in July 2013.

According to the latest stats, Sweden has a population of around 9.7 million. While that is a relatively small market (compared to the English speaking world), Sweden is probably higher on Amazon’s list than you might think. This is one of 4 countries in the EU that have the highest percentages of consumers who buy paper books online according to a recent poll. With 38% of respondents buying books online, Sweden is right between Germany (41%) and the UK (36%).

Tell me, which are the 2 most developed ebook markets in Europe?

Sweden is also one of a handful of European countries that doesn’t have a fixed price law for books, so if Amazon does launch in Sweden there will be no law to stop aggressive discounting. Publishing contracts might block it, though, so I would not assume Amazon is going to be their usual rapacious self.

iOS 5 will bring reading to the not-so-small screen

You made the Publisher’s Lunch, congrats.

I make an effort to add more to your translation of the later article, as we Finns start learning Swedish at seventh grade:

The company mentioned, Bokrollenden, is owned by all the biggest publishers and therefore has a monopoly-like position for book data there. They say Amazon has come closer in negotiations to Bokrollendens demands, before that Amazon had set "tough demands". Both p and ebooks have been discussed.

Bromberg is sure that Amazon’s arrival will lead to a major power change. She’s suggesting the big publishers have had it too much their way so far. Amazon will be pressing everyone in an equal way.

Axelsson believes confidently that Amazon has not arrived in Sweden yet because of two local net sites – there is "no consumer demand" for more. He also mentions the almost duopoly of Bonnier and KF as publishers in Sweden (and they own the two local ebookstores…)

Veteran Weyler is worried about profit margins and everyone getting paid properly. Amazon doesn’t deserve his "solidarity".

A trade magazine reporter believes Sweden is just one part of Amazon’s quest for world dominion. It can "break" the local market in a bad way. They are also in discussions in Norway. (Probably by now I should ask my ex-colleagues here what’s going on.) He thinks refusing to sell to Amazon is not wise, but the publishers could fix their discounts and demand "ordinary" prices. Ha. He also knows that Seattle won’t care and will probably sell at a loss to get market share.

They also interview a German reporter, who claims that there the publisher-led Tolino e-reader has 30 percent market share vs. 40 for Amazon. He recommends local cooperation against Amazon.

A very good point, Nate, on the fixed price law.

Thanks for the corrections.

It’s just about impossible to find decent selection of Swedish e-books. (For example, none of Astrid Lindgren’s books are available in e-books! (Or at least, I couldn’t find them…))

Swedish bookstores could certainly do with a bit of shake-up. Right now it’s the municipal libraries that have the lead. Today it’s much easier to borrow an e-book from a library, then it is to buy one outright from a bookseller.

(I don’t actually live in Sweden any more, but I grew up there. (And I’ve still got my library card, which lets me borrow books on-line!))

Amazon's Deal with Bokrondellen Paves the Way for a Swedish Kindle Store – The Digital Reader April 14, 2014 um 8:12 am

[…] months-long talks with Swedish firms, news is breaking today that Amazon has signed a deal with Bokrondellen, a […]

Evidence mounts for an Amazon Sweden launch this year, but no sign publishers need worry yet – The New Publishing Standard June 25, 2020 um 12:26 pm

[…] are no reports emerging that Amazon is talking with Scandinavian publishers.Amazon, was apparently in negotiations with Swedish publishers back in 2013, but self-evidently nothing came of it at the time. This time publishers are, so far at least, out […]