Are You Ready For The Next eBook Boom? 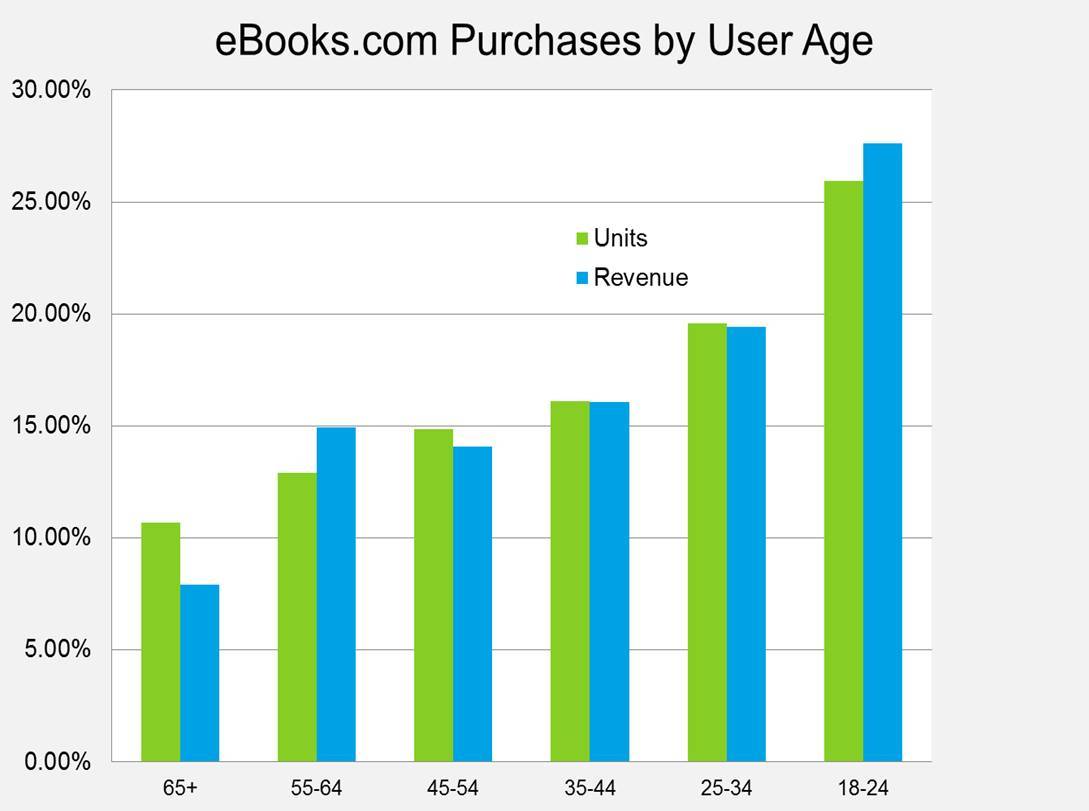 The legacy book publishing industry is fond of telling itself comforting myths.

For example, one myth that just crossed my desk was the idea that younger readers preferred print books over ebooks. This is comforting to the legacy industry because it reassures them that their bad business decisions (high ebook prices, to be exact) will not continue to haunt them.

Alas, like many myths, there is little to back it up.

I was reading that Vox retrospective on the ebook revolution (the one that Teleread commented on, and Good e-Reader plagiarized) when I came to this quote from Andrew Albanese of Publishers Weekly.

And in part, Albanese tells Vox in a phone interview, that’s because the digital natives of Gen Z and the millennial generation have very little interest in buying ebooks. “They’re glued to their phones, they love social media, but when it comes to reading a book, they want John Green in print,” he says. The people who are actually buying ebooks? Mostly boomers. “Older readers are glued to their e-readers,” says Albanese. “They don’t have to go to the bookstore. They can make the font bigger. It’s convenient.”

Yeah, that claim is not true at all.

Update: Author Tom Wood sent me a couple screenshots, and I now understand why people think there’s no reason to market ebooks to Gen Y. This conclusion is based on data from a Library Journal survey. When looked at it in isolation, it appears to shows a preference for print. The problem with that conclusion is that survey data on the millennial-aged cohort show a preference for print that is almost as high.

Younger age cohorts are not only more likely to have read an ebook, they are also buying more ebooks – and I have the data to back that up.

For starters, the most recent reading survey from Pew Research Center showed that the 18-29 age cohort, which includes the tail end of the millennial generation, was the most likely to have read an ebook in the past 12 months. 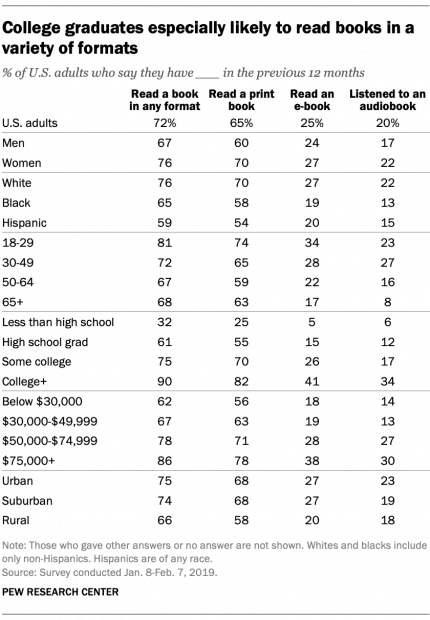 And not only are youngins more likely to have read an ebook, they are also buying more ebooks.

eBooks.com has revealed that their best customers are still in college. and that "62% of ebook purchases are made by people aged between 18 and 45". 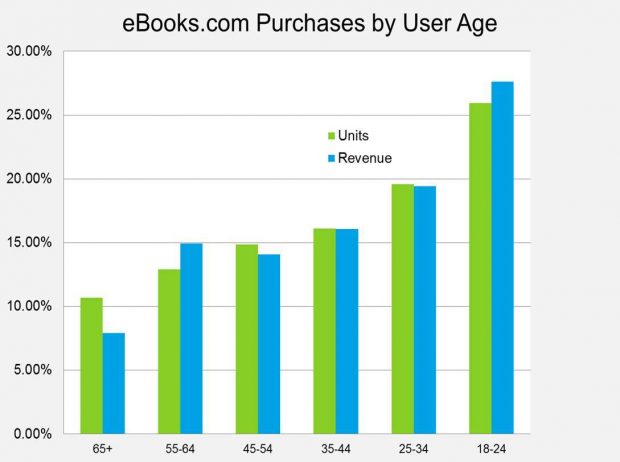 eBooks.com was cautiously optimistic about market growth. They spoke in terms of generations, but when I look at this data I see a market that is going to be growing for the next decade.

As Gen Z gets older, the younger age bracket will be replaced with more digital-first buyers. Each year will bring us more ebook buyers, and that means more sales. Most of those sales will be made at Amazon and go to indie authors, so the legacy industry will continue to pretend they’re not happening (I for one am looking forward to the next myth), but they are still going to happen.

Are you ready for the coming ebook boom? 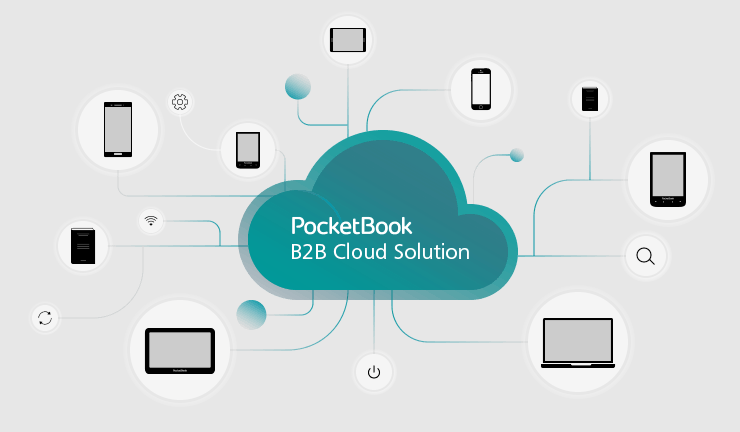 FYI, my latest column of ebook deals is out — with Smashwords sales ending Dec 31 http://www.imaginaryplanet.net/weblogs/idiotprogrammer/2019/12/roberts-roundup-13-sept-2019-edition/

I think the trend in younger readers is simply a response to younger authors publishing ebooks. Nothing strange about that.

I think in the last year or two the Big 5 have changed their ways and are doing spot sales on major titles. Then promoting them through Open Road Media and bookbub. I can pretty much do an Amazon price alert on anything by Big 5 and expect that the price will go under $4 for at least a day this year.

But really who cares about the big 5 anymore?! There’s already a ton of authors and books to dive through…

And btw, did Trump pass that law that says no one can die until they’ve read all the books they want to?

Ytht Vox piece is so full of propaganda and misinformation that it ever hits a fan, the entire island of Manhattan will be splaterred.

Look, it is a recognized fact that corporate media is so incestuosly tied to the parochial corporate publishers that they don’t bother to look outside their doors to pay attention to what their own media neighbors are reporting.

Rolling Stone: "CD sales have declined 80% from $450M to $89M over the last ten years. are people listening to less music? No. They’re listening to more music. They’re just listening to music digitally, getting it on the fly, direct to their listening device, without getting off their seat.i

CNBC: Disc-based video sales have declined 86% over 13 years. Also, Cable subscriptions are dropping by the hundreds of thousand each month. Smaller cable operators are ditching cable TV and retrenching to internet only. Are people giving up on movies and TV? No. They’re getting their content on the fly, digitally, from a half dozen massive archives or free ad-supported aps.

ArsTechnica: US video game market has in six years gone from two-thirds physical to three quarters digital. Microsoft is selling a diskless console and its moving well. Gaming subscriptions on the three major console patforms are increasing rapidly. Game streaming in on the launch pad. (Even if, predictably, Google crashed and burned.) And the PC digital gaming distribution business is getting serious competition for Steam. Gamers are increasingle getting their games on the fly, straight to the devices, without leaving their seats.

So, riddle me this: in what universe will people used to getting their music, video, games, (and gossip) all digitally, on the fly, direct to their Phone, tablet, PC, TV, sound system, or console, refuse to get their entertainment reading on the fly, direct to their gadgets, without leaving their seat, and instead choose to drive out a half hour or more to wander the aisles of a bookstore in the hope to find something they like out of a few tens of thousands of volumes instead of a millions-deep digital catalog?
Because books are special?
Because they like the smell of rotting dead tree pulp?
Because they meekly follow the curators of literature?

All markets have inertia. People will stick with a given platform for years even after massive failure or obsolescence. There’s still people using video tape out there. You can still buy players. But eventually the market moves on, each their own pace.

And the real digital revolution isn’t even happening downstream, at the consumer level, but upstream, at tbe creator level. Indie musicians, bypassing the studios; top rank producers, directors, and actors moving to tbe video streaming world to avoud the straightjackets of movie and broadcast formats and gatekeepers. Indie coders targetting mobile gamers direct instead of working for big gaming publishers and even those publishers going digital themselves.n

Publishing still has the comfort of the big names propping up their sales.
If tbey are getting less "quality" manuscripts as they claim and failing to establish the careers of most of their chosen debut authors, they still have their legacy authors. Their Kings, Roberts, Patterson, et al, with faithful fan bases that will keep them going…for now.

Times change, markets change.
Consumers are going digital and no amount of handwaving can hide that; not by reporting dollar sales instead of units or by lumping textbooks in with voluntary purchases, and not by ignoring Indie sales.
They can hide, for a time, the creators bypassing the establishment but only for a while. Because establish creators retire and move on and if they don’t have replacements…

That’s still a decade away, more or less.
But except for Patterson, the other legacy authors will stop producing content eventually.
(Patterson, of course, has a secret database of story ideas and outlines that can be ghosted to his formula by partner writers for decades and centuries to come.)

Vox and Publishers Weekly can spin zombie memes all they want but as somebody or other said, THE TRUTH IS OUT THERE. In plain sight.
No need to dig for hidden conspiracies.
Just open your eyes and see how people are voting their wallets.

you should also add romance, SF, and thriller genres to that list of gone-digital

Fantasy, too.
There’s lots of segments of the entertainent reading spectrum that are deep into ebooks.

There’s entire subgenres that barely got noticed by tradpub that are flourishing as Indies.
Superhero fantasies are one that one would expect corporate publishing to go after, what with all the money flowing to the movies and tv shows, yet other than Wild Cards and a title or two per decade the Manhattan mafia has shown no interest while Kindle is crawling with good stuff.
They really have no clue what consumers really enjoy.

I read all my books via eBook as space is my primary concern. However, when I just want to find a book organically I still go to the bookstore or library. No digital marketplace or social media (I use goodreads too) has what I call the “kismet factor”. So on some level, even though I’m a eBook convert, I dread the day physical goes away.

Hi. I’d like to throw in my 2 cents. I’m a junior high English teacher at a school with a very high socioeconomic level of students, so I’m very well-acquainted with the reading habits and reading trends of young people who are able to afford technology and buying books. When I first read the same Vox article, I had the same dismissive initial reaction as many of you. But then I thought back to what I’ve been observing my own students' reading habits over the past few years, and I’ve realized that there may some credence to that argument.

I’ve noticed a big decline of students choosing to read books digitally (I give them the option to use print or e-books during silent reading times) and at times when I give students the option to read a textbook digitally or from a print copy, the vast majority have been choosing print over the past few years. I know it seems counterintuitive, but my theory is that because reading e-books requires a sustained amount of focused concentration on a usually smaller, brighter screen, that the younger generation, born surrounded by small bright screens, has developed some kind of natural aversion or fatigue to reading on a phone. But wait, you might argue, all of the other forms of digital media require looking at a screen. Yes, they do, but not in the same way. With music, you’re only occasionally looking at your screen to set your music or skip to the next song. With movies/tv, the screen is usually bigger and farther away. Social media is increasingly bit-sized with attention flitting from one app/feed to the next. Reading e-books, though, requires a large amount of attention focused on one small screen for an extended period of time.
Anywho, I just wanted to throw in some anecdotal evidence. I know it’s not conclusive, and I know we’re talking a very small sample size (200 students per year over a 12 year time period) but I personally found the Vox article a little more believable when I reflected upon what I’d seen in my own classroom.

[…] The Digital Reader reacting to the Vox piece and working hard at striking fear into our hearts. He thinks Vox is […]