It might have taken Barnes  & Noble far longer than any of us would like, but I think they just saved the Nook.

B&N has rolled out a new update today that brings Google Play and other Google apps to the Nook HD and Nook HD+. These media devices can now legitimately be called Android tablets.

The updates will be pushed out to the tablets over the next few weeks. If you don’t want to wait, you can download the updates from the B&N website:

I have installed it and from what I can tell B&N is only adding apps; the fundamental Nook platform will not change. My Nook HD+ still has support for multiple user profiles, Nook Video, and other features.

But in terms of new stuff, I can see apps for Gmail, Chrome, Google Talk, Youtube, and Google Play Books. 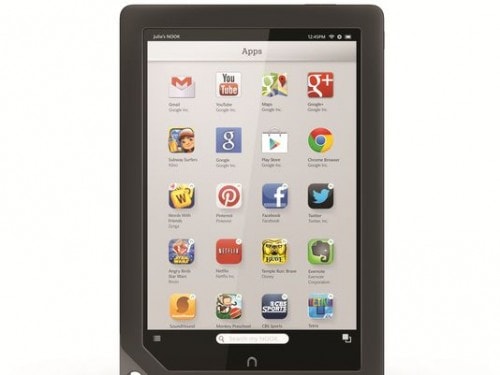 Yes, B&N’s tablets will now ship with a competitor’s reading app. That is probably an unpleasant pill for B&N to swallow but I suspect that Google made it a requirement for getting Google Play on the Nook hardware.

So do you think this will be enough to rescue the Nook platform?

It could be enough, I think.

Remember, the problem with the Nook wasn’t the quality of the hardware; the Nook HD and Nook HD+ are 7″ and 9″ tablets with excellent hardware and decent prices ($199 and $269, respectively). No, the biggest gripe I had was that B&N limited what you could do with a Nook tablet. That was why I returned my Nook Tablet in 2011, and it was a problem shared by the Nook HD and Nook HD+.

And I wasn’t the only one to be chafed by the limitations. B&N’s restrictions were also the reason that the various "Android on SD cards" did such a brisk business. I mean, Nook tablet owners were paying $30 or more just to escape B&N’s restrictions.  If that doesn’t show that there was a problem then I don’t know what does.

Update: I’ve just learned that the Nook HD+ still blocks me from sideloading apps. That is a poor decision on the part of B&N and it will to keep the Nook hardware less useful than the competition.

Hands on with the Phosphor E-ink watch (video)

The NOOK platform is a "corpse" with over 10 million units sold.

It doesn’t matter how lively the Nook platform was in the past if it is dead now. And since hardware sales were in the toilet the word corpse is not a bad description.

Ten million is hardly much to brag about after 4 years,is it Nate?
That’s not much more than Kobo and Sony and a far cry from the big boys in the 40 M range.

Sales decreased 13% in a single quarter. That’s not in the toilet, it’s just a bad quarter. Which they’re taking steps to rectify with this change.

And 10 million is still more than pretty much everyone else in the market except for Apple and Amazon. Probably about even with Samsung and Asus.

When did B&N announce it had sold 10M Nook tablets? Or does this inclue eink devices?

IHS iSuppli said that NOOK shipped about 5 million tablets (counting hte NOOK Color as a tablet) in 2011; Forrester Research said in November of 2012 that 5 million NOOK Tablets had been sold. Let’s put the number of HD and HD+ units sold from launch till now at somewhere between a few hundred thousand and a million. 10 million sounds about right as a ballpark figure, that’s without the eink devices.

That 10 million is bogus.

If you have better numbers, I’d like to hear them.

That 10 million number comes from the NY Times. It says thatB&N has sold ten million "NOOKs", which seems to imply the figure includes eink devices, but it’s not said explicitly.

Nice. I know what I’ll be doing tonight.

Well, now, that wasn’t so hard after all, was it?
Six months late for the prime xmas selling season but at least the don’t have to give’em away now. And they might stanch some of the market share losses to Apple.
I’ll have to pass the word to my sister; she’s been looking for a good generic android tablet.

This pretty much buries the Asus and HP low-enders.
no use pretending those parrots aren’t dead.

This seems like the first step towards shutting down their Nook app store.

And its probably the best move they can make. I like the B&N android skin and I love the reader over the Nook app but having FB messenger and other free stuff would be nice.

Triage.
Companies with limited resources can’t afford to pursue marginal revenue streams (apps, video) when their core is under pressure.
I notice the tablets are now back at their intro price; no need to discount when they’re no longer crippled. They might even make a buck or two off their inventory.

So, does that make the Nook HD a zombie tablet? 🙂

resurrection! woohoo! too bad they didn’t do this when the tablets first came out. as said above, woulda done well over the holidays of 2012.

Does this add Comixology finally?

That app is available in Google Play, so yes.

This should. be the last Nook tablet from BN. At least with their eink devices, there is chance someone will buy a book from their store.

How does this actually solve any of the problems in their Nook business, other than perhaps finally clearing their present inventory? Selling low margin hardware whose main attraction is somebody else’s content sounds like a business plan from the underpants gnomes.

While the present consensus is that this 'saves' the Nook it could also be a sign that B&N has really thrown in the towel and might be getting ready to depart the hardware business altogether. Desperate times in Nookville indeed.

Yes, and their seeming lack of interest in solving their storefront problems – such as their search function – remains inexplicable. This really seems like a (last?) attempt to clear their present stock. One cannot see them bringing out another tablet since this move makes nonsense of their let’s-sell-hardware-at-puny-margins-and-make-it-up-in-content business plan.

I think this is a good move for them, but:

Does B&N still take your money for apps, or do you need to set up a Google account? If the former, presumably those apps are not available from Google on other Android devices you might have which are tied to a Google account. Which I would not like.

Can you sideload apps now (without Android SDK tools)?

They still sell apps. I will go test the sideload.

Mr. Semple, I do not understand your question, could you clarify what you are asking. This could help me and maybe others. Thank you.

Open Android devices let sideload apps (by downloading the apk install file) via browser, USB, or SD card (when available) after changing a line in "Settings" that allows "installation of applications from unknown sources".
What Nate is reporting is that the Nook lets you install apps from the B&N app store and the Play app store but if you want to install an app you bought direct from the developer you need to use the Android SDK toolkit.

This means, apparently, that you can’t install alternate app stores like 1Mobile or Amazon.
Would that be correct, Nate?

So they still think they’re Apple; the want a cut of any money spent on apps on *their* hardware.
(shrugg)
At least you can get free apps from Play.
98% of the time this won’t bother users.
But the users it bothers *on principle* are going to be bothered 100% of the time. 🙂

Well, at least there is still reason for the XDA folks to be rooting the thing. 😀

I find it interesting that after Microsoft invested a ton of money in the Nook that Nook signed a partnership with Google. Maybe both Google and IT view Amazon as the bigger long term threat and see the need to have a counterweight to Amazon’s increasing share of the market.

Google is afraid of Amazon, yes, but the reason B&N added Google Play is that the customers demanded it.

Add Samsung right ahead of Amazon; they are now reskinning their android tablets as well as their cellphones. That puts them halfway down the road to a proprietary android fork of their own. And even if they don’t, they can squeeze Google for a share of the android ad and content revenues from their hardware.

I’ve also seen rumors that they are looking to imitate Blackberry and put an android Dalvik clone on top of Bada. With their hardware footprint, if they do an appstore of their own they could quickly get most of the developers onboard.

1- MS invested chump change in Nook. (This is a company that a $6B write-off barely impacts their finances for *one* quarter.) They may not be sitting on $150B in cash but they do have over $50 in the bank. 🙂

2- MS invested in nook so they could add ebooks (on the cheap) to the Windows app store. They don’t care what B&N does on their end as long as they maintain the ebookstore and they get a cut of ebooks sold from Win8 devices. This is lie te Amazon/Waterstones and Kobo/indie bookstores deal.

Sure woulda bought an HD+ for 150 last week if I’d known this was coming.

I was so fed up with barnes and noble’s closed approach towards other app markets that i had literally made up my mind that my nook hd would be the last nook that i would ever purchase, this change however will definitely keep me as a loyal customer to B&N. It’s just so frustrating seeing everyone around you with cool apps while you only have access to the cruddy ones that companies decided to upload to B&N’s app store.