HarperCollins Signs Deal With Bookmate – but Not Kindle Unlimited

The growth of the subscription ebook market continued apace today with the news that HarperCollins had signed a deal with Bookmate.

Bookmate, which is primarily focused on Russia and ebook markets in eastern Europe, will now be able to offer its 1.5 million users ebooks published by HC. No one is talking specifics on the numbers, but the press release does say that "books by hundreds of authors, including CS Lewis are included in the deal".

Simon Dunlop, founder of Bookmate, commented: “This is a big moment for Bookmate. Our users get access to thousands of great new ebooks in English and the recent partnership we have signed is a massive vote of confidence from the publishing industry.” 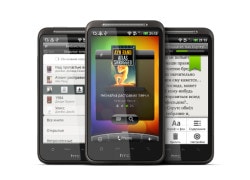 The service offers a catalog of 500,000 titles which can be read on social reading apps for Android and iDevices. Bookmate recently updated the apps with a social feed which allows readers to follow their friends, favorite authors and celebrities on Bookmate, while also sharing their favorite books and passages.  According to Bookmate, users on average spend 54 minutes a day reading ebooks.

I’ve covered Bookmate in the past, including how it has picked up funding from a leading Russian retailer, its reasons for focusing on certain markets (where piracy is an issue), and how its business model differs from Scribd’s. So I won’t repeat any of that here.

But I will note that Bookmate has a deal which Amazon has not yet secured for Kindle Unlimited. Following the deal between S&S and Denmark-based Mofibo, this is the second time in only a couple weeks that a smaller ebook subscription service scored a contract with a major US trade publisher which Amazon could not get.

I think we’re seeing the start of a trend of Amazon being shunned in this market (for want of a better word).  If it continues then Kindle Unlimited could well be put at a disadvantage.

This trend, if it exists, could well explain the speculation that Amazon is about to open up Kindle Unlimited to all KDP authors – with no exclusivity required. This would give Amazon a significantly larger catalog, and what’s more the idea is already getting positive responses from some indie authors.

[…] From Nate Hoffelder at The Digital Reader […]

Posted this on Passive Voice, where I found the link to the original (this article) :

I’ve maintained from way back, long before the current Hachette “thing” – that Amazon no longer needs exclusivity to continue succeeding.

With more and more so called big publishers going with other subscription services, regardless of size, regardless of number of titles, the more, I believe, this opens the door for Amazon for open Kindle Unlimited up to everyone.

If Amazon goes non-exclusive, and garners even more marketshare, I’d find it hard to believe big publishers or other distributors can complain it’s because of unfair terms.

Yes, that’s pretty much what i was thinking.

Ok (smiles). I feel I’m missing something here. I’m agreeing and adding (I thought) that this would also remove the potential for other distributors or publishers to cry foul. I have been rather slow today 🙂

Sorry, I did not intend to come across as critical.

Wife and I have been trying to figure out what the other’s been saying all day today. Residue from the the total lunar eclipse I think 🙂

[…] The new partnership with StarHub is actually the first expansion news I have heard from Bookmate since they raised that round of funding in May, although they did announce a new deal with HarperCollins in October. […]