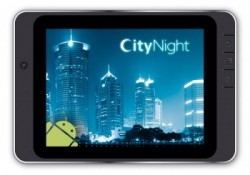 I don’t know about you, but I like finding all the various brands that a device is released under.

This tablet is sold as the Bebook Live and it has also shown up in Spain on the bq website as the DaVinci. It’s a 7″ Android tablet running Android v2.2 on a 1GHz CPU with wifi/Bluetooth, a 2MP camera, 4GB Flash, microSD card slot, g-sensor, and it also has HDMI out. The screen resolution is 600×800 and it has a capacitive touchscreen.