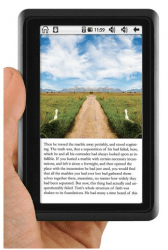 A couple months back I posted on the Skytex Primer Pocket, a 4.3″ Android handheld. It is an underpowered device with a low res screen, but on the upside it did sell for only $99. Today I may have found a better deal.

The Ematic Twig looks to be a very close relative of the Primer pocket, and if it didn’t show as having a higher resolution screen I would think actually they are the same hardware. The Twig is running Android v2.2 on a reportedly dual core CPU. It ships with either 4GB or 8GB of Flash storage,and it has Wifi, a microSD card slot, headphone jack, and a g-sensor. it might also have a speaker, but that’s not clear.

I don’t have the full specs, but the Twig does look a lot like the Primer Pocket, doesn’t it? But the specs aren’t identical, so far as I know. The Twig lacks the microphone found on the Primer Pocket.

I’ve been looking at getting a budget handheld so the twig is going on my to do list. It’s right in the price range I want, and it’s about the right size. I’ve had 4.3″ handhelds before, and in fact I still have a Nokia 770 Internet tablet somewhere. It’s a good screen size and just about perfect for my largish hands.

Now, I’ve gotten a fair amount of flack for criticizing the value of the Samsung Galaxy Player. That device is about the same size but costs close to $300. As I see it, the Galaxy Player fails in its goal to be an iPod Touch competitor (the dual cameras, Bluetooth, and GPS add too much to the cost). The Twig, on the other hand, is right where I think an iTouch competitor should be.

Of course, the hardware is probably also cheap, but I won’t know that until I put my hands on it.