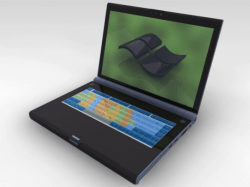 CES is coming up in a couple weeks, and some companies have already started sending out teasers. iriver was actually the first to do this when they told everyone about the new ebook reader that they planned to show off at CES.

Well yesterday I got email from NajmTek. This is a new tech company and they’re bringing their first product to CES in January.  It’s the U-book, and it will be a dual screen laptop.

Najmtek is only releasing product renders at the moment, so I’m taking this with a grain of salt. But this laptop does look very cool. As you can see from the image at right, the U-Book is using a fairly standard laptop chassis, with the usual ports like HDMI, USB, card slots, ethernet, and the like.

Najmtek then modified the design and replaced the keyboard with a second screen. They also have said that they’ve created a number of different layouts for the onscreen keyboard, including the qwerty and azert, but they are also showing several unique designs like the trackpad concept below.

Najmtek is also promising that you’ll be able to create your own custom designs, but I will believe that when I see it. Allowing for user customization is a lot harder to do than just offering alternatives.

They haven’t released specs yet, but if this is the actual U-Book in this demo video then it looks like Najmtek is going for the desktop replacement market, not any netbooks or any of the lighter categories. That’s good. This is likely going to be an expensive piece of hardware so it’s best to get the most value out of it.

I don’t have any details yet on release date or price, so I will be looking into it. In any case, this is definitely on my list of booths to visit at CES 2012.