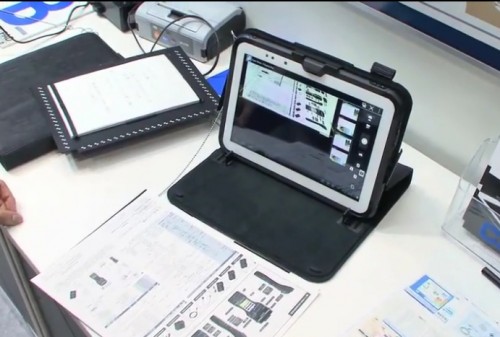 About a month and a half ago Casio launched a new line of Android tablets called Paper Writer. These tablets caught my eye at the time becasue the press release, which had been poorly translated from Japanese, hinted at some interesting paper/digital integration. Unfortunately there wasn’t much info available at the time about these pen/tablet hybrids, so I wasn’t able to do much more than cover the basic specs.

Today I came across a video from DigInfo.tv. The came across a Paper Writer tablet at a tradeshow and put it through its paces. It turns out the tablet doesn’t work quite the way I expected.

The Paper Writer tablet demoed in the video comes with a 10″ screen and runs Android 4.0 on a 1.5GHz TI OMAPS CPU. That’s not very impressive specs for a premium Android tablets, but this tablet also has a pair of 5MP cameras and that’s where things get intriguing.

I’m not sure where the second camera is located but at least one is in that black nubbin over the long side of the screen. Unlike most tablets which have the camera simply facing out, this one is positioned at a odd angle. It’s intended to be used to photograph the stack of papers lying in front of the tablet, so Casio’s engineers mounted it in the nubbin.

The Paper Writer tablet is also designed to use the camera to capture the notes you write on a pad of paper. The notepad fits into the custom designed case, and you can trigger the camera by half closing the case. You can watch this video for a better idea.

So this wasn’t the pen/tablet hybrid I expected, but I think this could be more useful. With this hardware you can quickly scan a lot of paper documentation and convert it to digital while on the go with minimal effort. And clearly that is part of the concept for the Paper Writer.  It has a rugged frame, drop resistant screen, user replaceable battery, and comes with a screen which is reportedly bright enough that it can be used outside.

There’s no mention of a retail price but this tablet is scheduled to hit the Japanese market by the end of September.  It’s clearly targeted at the business market so i wouldn’t be surprised to if a US model were released with a retail of over $1,000.