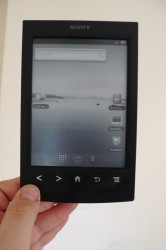 Remember how I wrote yesterday that a hack was in the works for Sony’s new ereader? It turns out that I was about 12 hours ahead of the actual hack being released. I think I should have waited.

The complete multi-step hack was posted this morning on The-eBook.org. It requires updating your T2, jailbreaking it, and then installing a new set of apps (here). The process takes a bit of time but it does work, as you can see from the image at right.

But I’m not sure it is worth doing just yet. My T2 is surprisingly unstable. Virtually every app from the web browser to the search widget to the Amazon Appstore client has crashed at one point or another. I have not even tried to install any new apps and I’m not planning to do so.

The set of apps i installed are basically the same set of instal files as used on the earlier PRS-T1. It includes the Zeam launcher, CoolReader, FBReader,  Dropbox, and other apps. These apps work, so at the very least I have a minimum function tablet- not that it is worth much.

Now that I have hacked it I know that this ereader is running Android 2.2. That’s rather disappointing considering that the previous model, the T1, is also running Android  2.2. Sony cares so little about this device that they didn’t even bother to update the OS it is running on. Okay, the average user wasn’t going to be able to use the features of the newer versions of Android, but they would still benefit from the under the hood improvements found in newer versions of Android.

If you have the T2, I would recommend waiting for a more stable version of the hack. And if you’re thinking about getting this ereader, I’d go for the earlier model instead. It’s cheaper now and has a headphone jack, which the T2 does not.

But if you are dead set on hacking your PRS-T2, here are the instructions.

At this point you should be looking at a standard Android home screen. If not, make sure you updated the ereader and then repeat steps 3 through 9.