Parts Cost Shows that the Kindle Fire Sells for Less than Cost – or Does it? 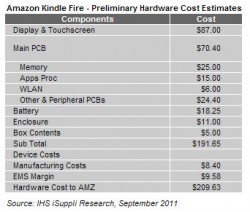 The  gadget cost experts at iSuppli  have just released their estimate of the parts cast for the new Kindle Fire. As we all suspected, the Kindle Fire is probably subsidized by Amazon and selling below cost.

Update: iSuppli released a new estimate yesterday. Now that they can see the guts of the KF, they think it cost around $202 to make.

But before you read too much into it, please remember that the experts at iSuppli have not seen the guts of the Kindle Fire so they don’t actually know what is in the Kindle Fire. There are so many wild guesses in this estimate that it might aw well be next year’s federal budget. In fact, I doubt that anyone who worked on those numbers has even been in the same room as the Kindle Fire. I’d strongly urge you to take these numbers with about a pound and a half of salt.

With that being said, iSuppli estimated that the Kindle Fire cost $191 in parts alone. Add in their estimate of the manufacturing cost and the total rises to #210.

I would guess that their estimate is probably on the low side, perhaps by as much as $30. But to be honest I do not know. In any case, we already knew that the Kindle Fire was a subsidized tablet.

Once I knew that it had a dual core CPU, IPS screen, and Gingerbread, I could pretty much guess that it was subsidized. Even if Amazon had stripped it down to the cheapest components possible, the software development cost, once factored in, would have been enough to convince me of the subsidy.

Oh yeah, that’s one detail that iSuppli can’t estimate. It’s a people cost, not hardware, so without inside knowledge it’s almost impossible to guess. But you can bet that it adds enough to the cost of each tablet that Amazon are probably taking a loss in the short run.

Of course, once they sell their millionth Kindle fire they won’t be taking a loss anymore. But I doubt that will happen for at least a couple months.

iSupply’s estimate that Amazon might end up with a $10 net profit out of increased sales probably sounds meaningless to many but to Amazon a $10 added profit on a $210 investment works out to a 4% margin. Bezos has repeatedly stated he’s not afraid of "flirting with red ink" so any net profit out of a new venture is fine by him. Sell 3 million Fires, earn $30 million. Not a bad opening act. And, odds are, iSupply is way conservative on the added sales Fire customers will bring.

Now, the software development cost is in fact substantial but the way Amazon is organized that is bookkept as overhead; the salaried employees coding the Fire software would have been doing something else if not doing that.

Bottom line: Fire exists to establish a new business for Amazon. If it does that and turns even a 4% profit, Bezos will be popping champagne corks.

Think you’re forgetting that the Kindle Fire is basically a front end for their online store and all the services they’ll be providing.

Amazon got ebooks, videos on demand, music on demand, and other services all directly hooked into the Kindle Fire for easy access. The 30 day Premium membership giving new users a taste of what they can have access to, etc.

Services like the "SILK" browser will be marketed to other devices after the KF release for example.

So there is no question Amazon will be making huge profit off the Kindle Fire.

The Kindle Fire may be a very basic ARM tablet but the price should make it sell well and hook a lot of people onto the Amazon services.

The build cost may also be just below the sale price. Mind the design is basically taken from the RIM Playbook that the base 16GB model costs about $273 to make.

However, the AKF doesn’t have bluetooth, no GPS, no G-Sensor, no cameras, no HDMI port, no quick charge port, bezel gesture sensor seems limited to one direction, and only half the storage space.

I would add no memory card expansion option except the RPB lacks that as well but the reduced SSD capacity alone could have saved them quite a bit, especially if they went with a slower drive, most everything would be running off the cloud anyway.

So add the deductions from the rest mentioned and the cost could well be below the $199 pricing.

It’s also possible Amazon got a deal on the build costs with the likely large order they made. So wouldn’t be surprised if they are actually making a small profit. The Amazon rep who demoed the KF at least stated they are going to be making profit on both the KF and the services when he was asked about it.

It’s not entirely true that the employees coding Fire software would have been doing something else; Amazon has made a significant investment in hiring more software engineers to ramp up this part of their business. Now, this isn’t the end of what they’ll do, but they were hired because Amazon wanted to get into this business, and they wouldn’t have been off coding the back end of the fulfillment database instead.

So substantial, but it will be amortized over time and multiple devices; Fire isn’t the last time Amazon will use the tech in the Silk browser, for example.

In fact, the Silk hybrid processing tech is a natural for ebook readers and other devices with minimal onboard computing power. Searches, index-building, statistical analysis, even queries of data-compilation files could use a local file and front end with cloud-base processing.

We may yet see a minitel-style home terminal built off Fire tech, a cheaper more flexible Chumby- or Roku-competitor.

Hmm, that is certainly worth buying WebOS for.

iSuppli isn’t the only cost estimator out there.
UBM TechInsights has their own story to tell:
http://www.eetimes.com/electronics-news/4228505/Kindle-Fire-profitable-at-estimated–150-BoM

Their story says Amazon makes $49 per tablet.
So, typically, Amazon may be losing money, breaking even, or making a decent profit.