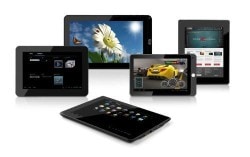 As you could probably guess from E-ink’s quarterly statements, this has not been a banner year for ereaders. The screen tech company has reported a marked drop in income, indicating that fewer ereaders were being made this year than last.

And if iSuppli’s projections prove true, next year’s ereader market is going to look even worse.

This market research firm has released a new set of projections today that predict that there will be a 27% decline next year. They’re projecting that only about 15 million ereaders will be shipped this calendar year, down by over a third from last year’s peak of 23.2 million units. Next year’s shipments are projected to total around 11 million units.

It seems that no one wants to buy ereaders anymore, and given the rise of decent sub-$100 Android tablets I am not surprised. And iSuppli isn’t surprised either. They’re projecting tablet sales to hit 120 million units this year, with shipments continuing to rise until at least 2016, when they project 340 million tablets will be shipped.

Of course, little of this comes as a surprise. I predicted way back in January that apps (running on tablets) would eclipse ereaders (in some ways they already had), but I dismissed the possibility that ereader shipments would drop. TBH I just thought that the total number of sales would be eclipsed by tablet sales, not that the latter would rise at the expense of the former.