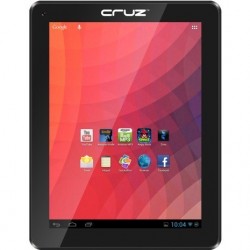 The Cruz D610 and Cruz Q610 are described as being dual-core and quad-core PU tablets with 10″ screens. The CPUs are provided by Allwinner, but that’s about all that VM is willing to say at this point. Both tablets will run Android 4.1, and they are said to hit store shelves in March. Retail starts at $199 for the dual-core tablet.

It’s not uncommon for the devices on display at CES to end up never being made, so it might seem that I am being unnecessarily harsh on Velocity Micro. That could be, but this company is particularly bad at follow through. I’ve been following them ever since they got into Android tablets in 2010 and over the past couple CES tradeshows they have demoed 6 Android gadgets and only released one. 5 were tablets and one device was an Android watch, and only the one tablet was released.

16% is a pretty bad average, so I think it is only fair to point out that the probability that any VM tablet we see next week won’t make it onto store shelves.