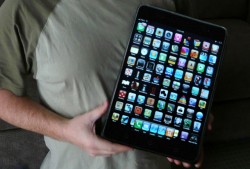 CES 2013 has come and gone, and now that things have quieted down in the tech blogosphere it is once again time to start speculating on Apple’s next product (this never stops but it does occasionally pause for other events).

Like many past Apple rumors, today’s rumor comes from a Chinese language website. According to the Commercial Times, Apple is working on an iPhone with a 4.8″ screen. They’re calling it the iPhone Math. It’s supposed to be launching in June and might look something like the image at right.

Okay, it’s not going to look like that. That image is a spoof, and I think it’s actually bigger than the iPad Mini. But the newer iPhone probably will have a larger screen. I have the feeling that Apple is noticing and responding to the ever growing screen size found on Android smartphones. Phablets like the Huawei Ascend Mate with its 6″ screen could be making some of the management at Apple feel inadequate (size matters). Even with a 4″ screen, the iPhone 5 could be completely covered up by the Ascend Mate. Apple might be thinking that they need to compete with tablets in that size range (or at least close the gap).

iPhone sales have slumped since early 2012 while at the same time the Samsung Galaxy Note sold 10 million units (as of August 2012). Put those 2 stats together and another larger iPhone looks less like a lack of strategic vision and more like a desired product that Apple isn’t making.

Sure, the larger iPhone is going to break some of the aesthetics or ergonomics of the iPhone platform, and the new screen resolution is going to add work for developers. But those are hassles that Apple is just going to have to accept. Customers want a larger screen and since Apple’s not providing one (yet) so they’re losing sales to the Android smartphone market.

In any case, I’m hoping that Apple makes this iPhone: