When I posted a couple weeks back that Rakuten didn’t seem to be interested in supporting Kobo in its other retail sites, I didn’t really expect Rakuten to prove me right quite this soon.

Rakuten has just updated their US web retailer buy.com. It’s now called Rakuten Shopping, and it redirects to rakuten.com. In addition to giving up a memorable and valuable name, Rakuten also neglected to integrate Kobo or even add any mention of the fact that a related Rakuten company sells content that customers might be interested in.

That’s not much of a news story, no, but it turns out there is a rather amusing side to this story. It’s not just that the new site still doesn’t sell ebooks, or that there isn’t even a hint of Kobo ebooks, or the fact that not all of Kobo’s ereaders are carried by Rakuten Shopping.

No, this bungling descends into farce when you search that site for “ebooks”. Any halfway competent website operator would use that opportunity to mention Kobo, but not Rakuten. The leading search result doesn’t even give you a hint of Kobo. Instead it offers you a self-published print title (distributed via CreateSpace) that promises to help you get your ebook into the Kindle Store. 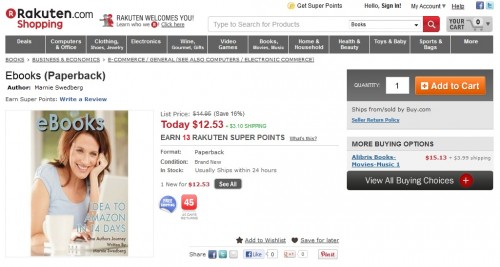 When I wrote that post 2 weeks back I wondered why Rakuten seemed indifferent to Kobo. The lack of promotion was odd, but the recent actions of Rakuten Shopping are another matter.

Whether this search result is a sign of hostility, disunity, or severe disorganization, at the very least it tells us that there is something seriously flawed in Rakuten’s corporate structure. And that does not bode well for Kobo or their customers.