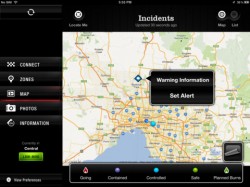 Remember last December when Apple Maps was stranding tourists in the middle of an Australian desert in the middle of summer? Apple’s back in the news again this week thanks to another grievous error being found in Apple’s excellent Maps app.

It seems the Country Fire Authority in Victoria, Australia, is reporting that the CFA’s FireReady brush fire reporting app, which gets its location info from the Apple Maps API, has misplaced a significant number of the townships surrounding Victoria.

Instead of placing the township names at their actual location, Apple Maps is centering the names in the relevant district.This leads to users incorrectly reporting the location of a fire, thus increasing the chance that it could cause serious damage and possibly even fatalities.

Numerous complaints have been made to Apple, but there’s no word yet on when these bugs will be fixed. CFA FireReady app user Marcel Theunissen said that his local CFA brush fire safety community group and others in the region had made “many complaints” about the Apple Maps lack of detail and errors in the CFA FireReady app. “One of the problems with Apple Maps is that they don’t show the names of cities and townships at all times,” said Theunissen.

“This makes it very difficult to quickly determine the exact location of fires once alarm calls are being received. This creates potentially dangerous situations and delays to activate phone trees if required,” he added.

But was this a mistake on Apple’s part? I’m not so sure.

Two points form a line, and it is pointing at the conclusion that Apple is trying to depopulate Australia. I don’t know why Apple would do that, but perhaps they want to annex it for themselves. Or perhaps Apple tried to buy part of Australia and was turned down. For all we know this could be Apple’s retaliation. In any case, it’s going to take a while before the continent is completely depopulated. There’s 22 million people in Australia and only 6 million or so iThings (4.2 million iPhones).