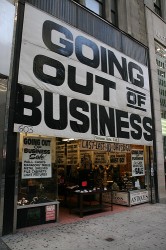 Barnes & Noble is expected to share bad news in their quarterly 10-k report later this week and there are already a couple early rumors with hints about how they will try to avoid going bankrupt.

The WSJ is reporting that B&N Chairman Len Riggio is interested in spinning off B&N’s retail bookstore chain and taking taking it private. This move would involve  selling off B&N College and Nook Media.

His expression of interest so far has been tentative, although one of the people said he was expected to make it formal this week, including with a public disclosure of his interest. If it proceeded, Barnes & Noble’s 689 retail stores would be taken private, separated from the company’s college-store chain and its Nook e-reader and tablet business.

Mr. Riggio own 30% of B&N. Coincidentally, he also used to own the B&N College division before selling it back to B&N in 2008/2009 (possibly on the strength of NookStudy, which B&N College was developing at that time).

The other rumor comes via the New York Times. Their sources say that B&N plans to deemphasize the Nook hardware in favor of content sales. B&N will reportedly work to get the Nook app on competitor’s hardware.

A person familiar with Barnes & Nobles’s strategy acknowledged that this quarter, which includes holiday sales, has caused executives to realize the company must move away from its program to engineer and build its own devices and focus more on licensing its content to other device makers.

“They are not completely getting out of the hardware business, but they are going to lean a lot more on the comprehensive digital catalog of content,” said this person, who asked not to be identified discussing corporate strategy.

On Thursday, the person said, the company will emphasize its commitment to intensify partnerships with other tablet producers like Microsoft and Samsung to make deals for content that it controls.

Today’s rumors come in the wake of news that B&N lost a lot of money this past holiday season and that they don’t expect the coming year to be any better.

I don’t think either solution is going to fix the company, but dropping the Nook hardware will at least slow down the bleeding. And no matter which rumor turns out to be true, clearly B&N has finally realized that focusing so much capital on their own hobbled, locked down hardware was a mistake.

More than anything I have trouble believing that the latter rumor will save B&N. They would be competing without a safety net against the smaller and nimbler competitor, Kobo, as well as their larger and smarter competitor, Amazon.

Yes, Kobo is now a serious threat. They have an aura of being in better financial shape than B&N as well as the annual report to back up that impression. Kobo is also backed by Rakuten, whose deep pockets could be useful in outbidding B&N for the privilege of having an app preloaded onto tablets and smartphones.

Frankly I think B&N did too much damage to public and private confidence several weeks ago when they announced plans to shrink for the next 10 years. The doubt that B&N sowed with that interview is probably going to be what kills them.