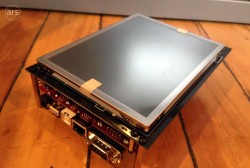 Who’s up for a background story in hardware development?

Have you seen the new article over on Ars Technica about the iPhone prototype? They posted a cool-looking gallery of photos of what they are claiming is the earliest known iPhone prototype:

The early prototype is also quite large—about 5″×7″ and roughly two inches thick. “Seems large now,” our source said, “but at the time it was really impressive seeing basically a version of OS X running on it. “From the looks of the logic board photos, Apple had a decent idea in 2005 of where the iPhone would end up, even if the final product became much more integrated.

Unfortunately, that is almost certainly not an iPhone prototype.

I would bet that it is a development kit that was assembled from commercially available components. IMO that thing has about as much relation to the original iPhone as the Macs that were used to develop iOS.

When I first read the headline I was as excited as anyone. I love gadgetry and being able to see how the first iPhone changed as it grew from a bunch of components shoved together into a sleek Apple product.

I was all set to drool over the gallery of photos, but then I saw them and it quickly became clear that we weren’t looking at an iPhone prototype. This photo punctured the bubble: 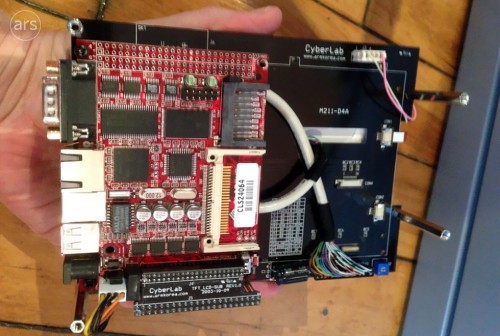 You’re looking at the underside of the device. The red circuit board on the right is what is called a development board, and it is used to drive the LCD display. It has the CPU, storage, ports, and card slots, and is nothing more or less than a computer (albeit in a compact form).

I don’t claim to have seen that particular development board before nor do I have inside knowledge of Apple, but I have seen similar products. Back when I was an undergraduate I dabbled in robotics, and I distinctly recall seeing similar boards used to control robots.

What’s a development board? Here’s Wikipedia to the rescue:

The CF card slot, SD card slot, serial port, USB ports, and expansion area visible in the photo above are all clear indications that we are looking at a commercially released development board. Heck, just the fact that the maker branded it with their logo is evidence that this was a commercial product and not something built just for Apple. With a little work, you could probably build a development kit (screen plus board) that looked almost identical to the one pictured above, and that should tell you just how common the components are.

Sorry to be nitpicky, but this device was not a parent to the iPhone. At best it might have been used by someone who was developing iOS apps or possibly iOS itself, but that does not mean that the hardware we are looking at above was in any a connected to or an influence of the iPhone design.

This thing may have run software that ended up in the original iPhone, sure, but that is about the only connection I would be willing to claim. And that makes this device no more an iPhone prototype than the Macs that are used to develop each new version of iOS.

P.S. If a hardware developer wants to tell me I’m wrong, feel free. But I still wouldn’t call that thing a prototype.