Today is the International Day Against DRM, the unofficial holiday dedicated to making more people aware of DRM and how to remove it.

I have long argued that one should always remove DRM in order to make sure you don’t lose your purchases, whether it’s due to switching computers, changing to a new ereader, closure of an ebookstore, or if a publisher simply decides to cut off access to the ebook.

And the events of the past year have once again proven me correct.  Several ebookstores have shut down in the past year, including Fictionwise, JManga, and BooksOnBoard. The closure of the first 2 stores has cost many former customers hundreds if not thousands of dollars, and the imminent bankruptcy of BoB could also cost readers hundreds of dollars. Fictionwise in particular was quite popular among international ebook fans, but when it shut down B&N simply cast those readers on the scrap heap. 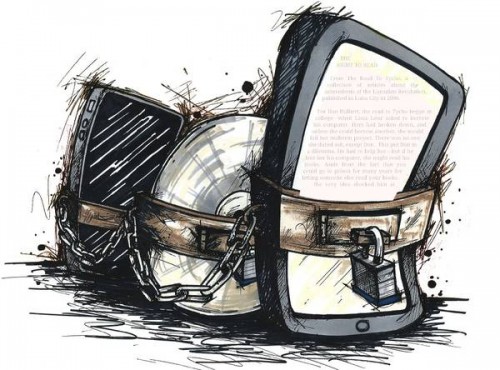 And as we have been reminded repeatedly, DRM is inherently hostile to the end user. We need look no further than the Sim City launch debacle to know that. Earlier this year EA released the latest edition of the ever-popular Sim City. This game had DRM that required users to be online all the time, even when they were playing alone. To make matters worse, EA’s servers weren’t up to the load. They crashed repeatedly in the first month or so after launch.

This debacle was so huge and pissed off so many customers that EA has since gone out of business. Well, no, but it did make EA a shoo-in for Consumerist’s “Worst Company of the Year” Award.

Since today is all about DRM, here are a few tools that will help you free your ebooks.

This is a FREE 1 step removal tool for Epub and PDF encumbered by Adobe Adept DRM. It can also remove the DRM from Kindle ebooks as well. I haven’t tried the Kindle tool yet, but I think it’s worth your time to take a look.

That tool is based on the work of Apprentice Alf, the patron saint of ebook DRM-removal tools.

How would you like to remove the DRM from ebooks ought from iBooks? Requiem can do that.

And for those who use calibre, did you know that you can install a DRM-removal plugin? I’ve posted instructions that show you how to configure a plugin to remove Kindle, Nook, or Adobe DRM. The same plugin now works for all 3 types of DRM, though setting it up for the Nook does require an extra step.