Qualcomm got a lot of press this week for a dummy 5.1 inch smartphone screen, but I would bet that the screen from Qualcomm’s other screen tech division has a better chance of hitting the market.

Several folks from Pixtronix were in the Qualcomm booth this year, showing off a new 7″ display that is based on a Sharp IGZO backplane.  This screen might not boast the super high resolution of the Mirasol dummy, but it does show promise of using less power that LCD or OLED while still offering better color quality than other low-power screen techs like Liquavista.

This unit measured 7″ diagonally, and it had a resolution of 1280×800. That is merely par for the LCD market at the moment, and far below cutting edge LCD and OLED screens, but that won’t be the problem it first appears. Thanks to the design of Pixtronix’s screen tech, it should be possible for them to produce higher resolution screens. 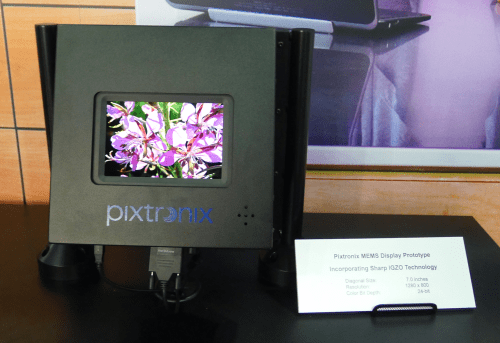 Qualcomm bought this screen tech company in late 2011. At the time many bloggers reported that Pixtronix was going to be integrated into Qualcomm’s existing and troubled Mirasol screen tech, but that will likely never happen. The 2 screen tech companies might both have based their tech on MEMS, but the actual screen tech is not interchangeable (see postscript for an explanation).

Mirasol’s screen tech is  wholly self-contained, reflective, and it will require a front light if you want to see it in the dark. Pixtronix, on the other hand, developed a screen tech that is intended to be added to an existing backplane.

In the case of the 7″ screen on display at SID Display Week, Pixtronix added their screen to an IGZO backplane. That backplane was developed by Sharp, which you might recall is one of Qualcomm’s manufacturing partners. 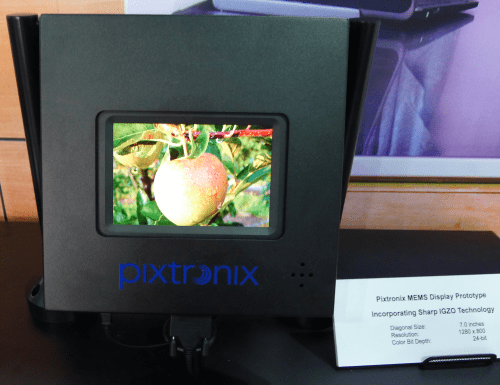 I don’t pay enough attention to non-epaper screen tech, but IGZO is worth noting because it is described as a low-power backplane. That is particularly noteworthy here because when the IGZO backplane is combined with a Pixtronix screen we end up with a screen that sips power instead of guzzling it. It’s a match made in heaven.

Or at least it would be, if this screen were under production. I could not get any firm info on when this screen will hit the market. But I will note that I hope that when a Pixtronix screen is released, it uses one of the newer high resolution IGZO backplanes that Sharp announced last week.

P.S. So why are they both called Mems displays? That has to do with the way that the Mirasol and Pixtronix screens refract light. Mems is short for Microelectromechanical systems, and the simple nontechnical answer is that these screens have really, really, really tiny switches inside them. The switches open and close to let specific light wavelengths through.

If you click on the link, Wikipedia will tell you that there are any number of different ways to make and use Mems. Mirasol and Pixtronix developed different technologies that just happened to fall into the same broad category.