This Sunday morning finds me blocked from accessing my preferred news reader service (network issues), and that reminded me just how much I miss Google Reader. And given the hiccoughs some of the leading news reader services experienced last  week, I am sure that I’m not the only one.

According to user reports, Flipboard suffered a couple outages in the week following the Google Reader shutdown, and Feedly also mentioned on their blog that they fixed a couple issues.

Flipboard’s first issue happened Tuesday morning when users woke up and discovered that their collection of feeds (the ones which had been rescued from GR) had vanished in the Readerpocalypse. This service had long been able to import a user’s RSS feeds from GR and build a custom reading experience from those sources, and several months ago they had even promised that they could continue to operate after the demise the venerable news reader.

Unfortunately. it turned out that Flipboard’s copy of those feeds were less reliable than the Flipboard developers thought. Techcrunch reported the story earlier this week:

A good number of tweets as well as private tips to TechCrunch this morning, indicate that something has gone wrong. Instead of seeing a collection of news feeds in Flipboard, users are merely presented with a message that reads “no content.”

Flipboard reportedly fixed the problem later the same day, but based on user reports from today and yesterday I am not sure that is completely true. Perhaps the developers were distracted by Flipboard’s second outage. 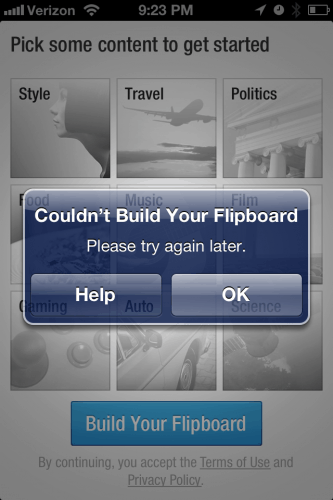 According to The Next Web, Flipboard went down completely on Friday:

Flipboard users are unable to load news feeds nor browser or create magazines on the service, while associated features — such as Twitter and Instagram — are not working either. Here and at the bottom of the post are screenshots of what we at TNW got after loading the app.

Flipboard acknowledged the outage. It says its team is working on fixing the problem and no user’s feeds or magazines will be lost.

That issue was also resolved later the same day, and while no explanation was given for the downtime there’s a good chance that the extra server load from ex-GR users may have put too much of a strain on Flipboard’s servers.

Feedly also suffered a couple issues this week. According to their blog, Feedly’s apps for Android, iPad, and iPhone were tripped up this week when Google changed a setting in Google Reader and confused the apps:

Sorry. This is not a capacity issue but a bug!  During the login, it tries to connect to Google Reader to help you migrate your feeds. Unfortunately, Google changed last night and is returning HTML instead of JSON and the feedly mobile client 16.0.522/530 has trouble digesting that, showing a error card instead.

Luckily that bug could be avoided by not logging out, and Feedly also updated the Android app to fix the issue. But the iOS app hasn’t been updated yet, unfortunately (thanks to Apple). 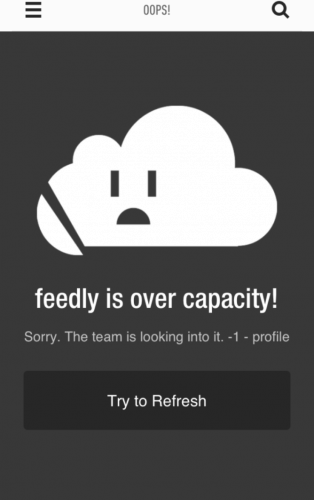 Feedly also reported earlier this week that they weren’t quite as successful at migrating everyone to the cloud as they had expected:

We discovered today that some of the feedly users were not successfully migrated to the feedly cloud. After a couple of hours of investigation, it seems that it was related to  the feedly extension /app not correctly getting updated to version 16 and therefore not triggering the automatic migration.

They’re still working on a more permanent solution, but their short term fix was to add a new import option so users could add their feeds by hand, rather than via an automatic import process.

This is actually the second jury-rigged solution Feedly has announced this week; the first was a crude but semi-functional option to export the feeds you follow in Feedly. I don’t know about you, but I would much prefer that these features had been in a more deliberative fashion rather than in a hurry.

Given how many people were put out buy the Feedly and Flipboard issues, I consider myself fortunate that the worst I had to deal with was a minor network issue.  There was a 3 hour period this morning where I couldn’t access BazQux at all. I never did figure out why it happened, but luckily the problem fixed itself.