signed a partnership deal with OnDemandBooks last September, much ink was spilled concerning the future possibilities of printing a novel at your local drug store.

It may have taken just over a year but that is finally happening in the northwest.

Seattle-based drugstore chain Bartell Drugs is going where many a library and bookstore has gone before; they’re adding an Espresso Book Machine to one of their stores. This chain of 60 stores has long had Kodak Picture Kiosks in many of its stores, and starting this week they will be the first to add print-on-demand machine to a picture kiosk.

The machine in question is one of On Demand Books’ standard models (which look like an escapee from the CMU computer science dept), and not a new design from Kodak. It’s the first one to be installed under the partnership, and Kodak is describing it as a being part of a pilot test.

Update: A first-hand report from Seattle blogger/author Joe Fallansbee says that it was installed a couple weeks ago:

A clerk at the Seattle store said the machine was installed about two weeks ago, and that Bartell’s was working on a web interface for the project. If the web interface is similar to other printing and copying services, writers will be able to upload PDF files from home and pick up the printed books at Bartell’s when they’re ready. Based on the marketing material at the store, Bartell’s and Kodak appear to be targeting writers, poets, students, and genealogists  who want to see their work in print, but don’t want to go through the arduous process of traditional publishing or independent publishing through author services companies, such as CreateSpace or Lulu. 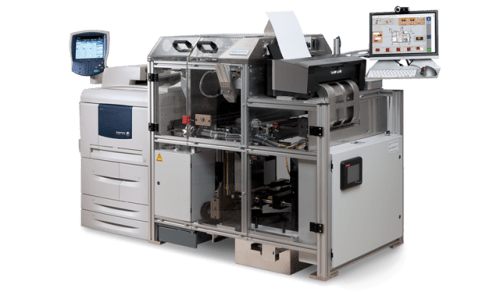 As you can see in the image above, the Espresso Book Machine is actually an aftermarket add-on to bog-standard printing equipment. The one I saw in the Harvard Bookstore, for example, uses a Xerox photocopier, a heavy duty Canon printer, and a third component, the actual Espresso Book Machine, which controls the copier and printer and binds and trims the books after they’ve been printed. The EBM is actually a minority of the hardware.