thought kids and fragile electronics have a hypergolic relationship, but based on a recent survey not all parents share my opinion.

A new infographic reveals that at least some parents let their kids use their smartphone. The infographic is drawn from a recent survey report (PDF) by Common Sense Media, and it’s based on a survey which was conducted in June 2013. A total of 1,463 parents, all with 1 or more child under 8, were polled about their kid’s media habits.

The report revealed that 4% of kids under 8 have read an ebook, which is double the number who had done so when this survey was last conducted in 2011. The number of kids using a computer has remained constant at 14%, while mobile device use has increased significantly (8% to 17%). 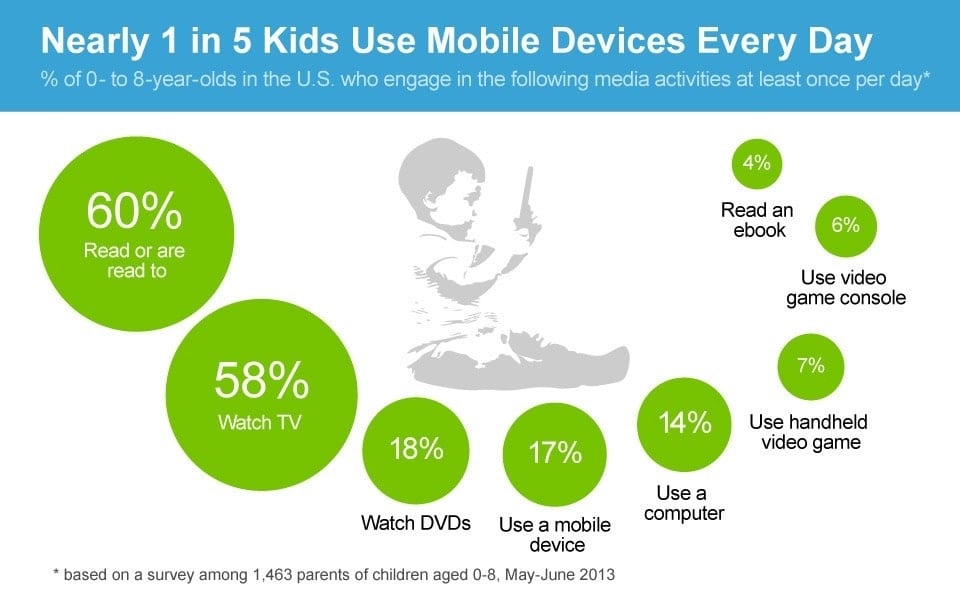 More Americans Have TVs in Their Homes Than Internet

The parents I know who don’t let their kids have their own electronic devices (including hand-me-down droid phones which no longer have a cellular plan attached to them, but also including bought-for-them tablets such as the iPad or the kindle fire) are extremely rare exceptions who tend to be cartoonishly rigid and often _really_ religious as well. All the other parents have long since figured out a way to satisfy the demand for Angry Birds, Where’s My Water and related demands. Because parenting is about Getting Through the Day, and mobile devices are the Best Thing Ever for that purpose.

In that case maybe I shouldn’t judge kids based on my brother; maybe he was more destructive than most kids. He disassembled several gadgets so we eventually stopped letting him have them.