head Jack Valenti may be famous for predicting that the VCR would kill the movie industry, but he’s not the first to look at new tech and cry that the sky is falling. I doubt that he is even the 21st to make that claim, though to be fair some of the doom and gloom predictions have come true.

The following infographic details some of the more outlandish claims made over the past 500 years, including photography killing off painting, recorded music leading to the demise of live performances, and newspapers and the telegraph leading to nervous disorders as people are exposed to “the sorrows of individuals everywhere”.

Okay, that last one has actually happened*, but it is the rare exception. 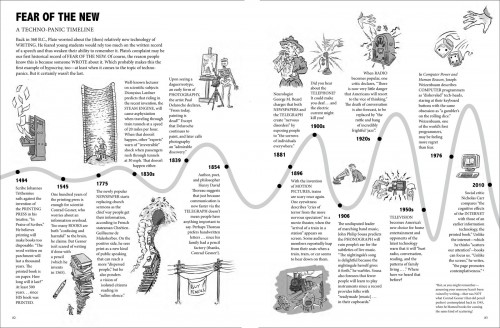 The above chart is missing a few of my favorites. Railroads, for example, were likened to the fire and brimstone of Hell. Standardized time was also vociferously protested, with some going so far as to smash their watches in protest.

But the infographic does include the fear-mongering that radio would make people stop thinking. It rather puts the whole “the internet is making people stupid” argument into perspective, doesn’t it?

* Example: If you’re convinced that a moment’s inattention will result in the worst possible outcome, or that we live in more dangerous times then 30 years ago then you have one of the nervous disorders that Dr Beard predicted in 1881. (The crime stats show that you are wrong.)