entire 15,000 unit order recalled after only a few months, Amplify’s first educational tablet was one of the more spectacular tech fiascoes of 2013. This resulted in quite a few disappointed and frustrated students, and that is a mistake that this 2 year old startup is not looking to repeat.

Amplify has just unveiled their second tablet, and it’s pretty clear that they’ve learned a thing or two. This tablet was developed in partnership with Intel, and it’s based on the reference designs that Intel has been developing over the past few years.

The new Amplify tablet takes the 10″ reference design Intel unveiled in January and improves upon it. Like the reference design the Amplify tablet has a rugged shell and is running Android 4.2 Jelly Bean, but Amplify boosted the CPU, stepping it up to a 2GHz dual-core Z2580. This tablet also has twice the RAM, 16GB of storage, a microSD card slot, and Bluetooth. 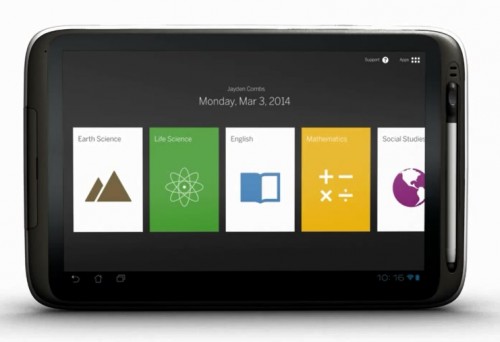 The 10″ screen still has a resolution of 1280 x 800, but on top of the screen you’ll find a layer of Gorilla Glass. There’s also 2 cameras (5MP and 1.3MP), Mimo Wifi antennas for increased reception, stereo speakers, and a microphone. And finally, the battery life is listed as 8 plus hours; according to the spec the battery is rated at 8.1Ah.

In terms of accessories, the new Amplify tablet will have the integrated stylus as well as headphones and an external keyboard.

As you can see from the specs, the new Amplify tablet is going to be faster and more rugged than the one it replaced. That tablet was based on an Asus consumer tablet which has proven to be less than sturdy in the hands of schoolkids. Counting the 15,000 rented to the Guilford School District, about 20 thousand have been distributed so far. They will be recalled and replaced by the new model, which is expected to ship in the Fall and be in students’ hands in time for the new school year.

Like their predecessor, the new tablets will be rented for $199 per year for 3 years.  It will come with device management tools as well as a suite of CC-licensed content. The previous tablet shipped with content from Khan Academy, CK-12 textbooks, and more, but the new tablet will have a slightly different bundle. You’ll also find public domain ebooks as well as a number of useful educational apps, including the Desmos graphing calculator, Encyclopaedia Britannica, EverFi’s digital literacy curriculum, Geogebra, Google Apps for Education, Merriam Webster Dictionary, Project Noah science tools, etc.

Amplify will also be licensing additional academic content separately. The first of the new content launched today, and it focuses on Language Arts curricula for 6th, through 8th grades. it  will set schools back $45 per student per year.