At 178 grams and 8mm thick, this device is both lighter and thinner than its predecessor, the Tolino Shine, and it is going to be only the second ebook reader to feature E-ink’s newest Carta screen tech.

The Vision will be running a closed version of Android on a 1GHz Freescale i.MX6 CPU with 512MB RAM and 2GB of available storage. It also has a microSD card slot, Wifi, and access to 25GB of cloud storage.

The 6″ screen has a resolution of 1024 x 758, the same resolution as on the Kobo Aura, Tolino Shine, and other 6″ ebook readers. And like many other ereaders, the Vision has both a frontlight and a capacitive touchscreen.

But unlike most other ebook readers, the Vision has the latest in E-ink screen tech. The spec sheet specifically mentions that the Vision has the Carta E-ink screen, which  features both improved contrast, faster refreshes, and extra geek points. (This last is not a practical feature, but it can be useful when a Vision owner is playing a game of one-ups-manship against other ereader owners.) The Carta screen also has the Regal waveform refresh tech integrated. This tech also launched last Fall, and it reduces the need for a full page screen refresh.

There’s little English language coverage so far, but I did find this hands on video posted earlier today. The narration is in German, but at least the images will give you a good idea of what the Vision can do:

This device will also have a number of accessories, including a screen protector as well as several cases.  The accessories leaked yesterday, revealing prices between 10 and 30 euros. 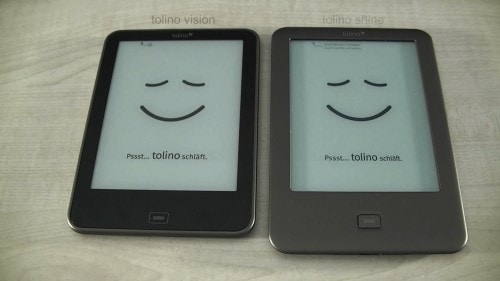 The Tolino Shine and Vision are supported by a consortium which included four media retailers and Deutsche Telekom which pooled their resourced in March of last year to launch the Tolino platform. Collectively the 5 companies accounted for 35% to 40% of the German ebook market.

After a year’s worth of marketing and development at a cost of millions of euros (and even the bankruptcy of Weltbild), the Tolino consortium believes they have 37% of the German ebook market.