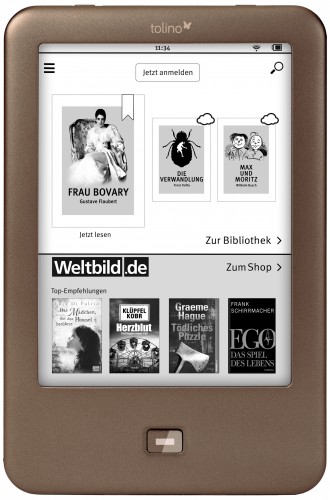 So 3 German booksellers, Deutsche Telekom, and Bertelsmann walk in a press conference … and announce they are going to be selling a new ereader called the Tolino Shine.

The Shine is going to bring generic ereaders to a whole new level. Its bland “me-too” design is based around the same HD E-ink screen found on the KPW and Kobo Glo. Like pretty much every other new 6″ ereader on the market, the Shine also has a frontlight, Wifi, and a touchscreen (IR).

This ereader has 4GB Flash storage, a microSD card slot, and claims up 7 weeks battery life. It is going to retail for 99 euros when it ships next week.

Edit: This ereader also has access to 25GB of online storage (provided by the Tolino platform).

All 5 Tolino partners (Thalia, WeltBild, Hugendubel, Deutche Telekom, and Bertelsmann) will carry the Shine in their 1,500 retail stores across Germany or on their website. eBooks will be provided via one of the 5 ebookstores maintained by the 5 partners. I am told that all of the ebookstores have been updated to switch them from their current platforms to a new one developed by Deutche Telekom. Some of the 5 partners have released reading apps, and in the near future those apps will also be updated to use the new ebookstore.

Readers will also be able to buy ebooks from the device itself as well as at Deutche Telekom’s 11,000 wifi hotspots across Germany. The new ebookstore boasts 300,000 German language titles.

So this is a Kindle killer? If you ask me, I think the Tolino partners forgot that in order to win you need to do something better than the dominant player or have some appealing feature that attracts users. I don’t see how the Shine meets those requirements.

Here’s a hands on video from lesen.net. Tell me if you think it looks like anything special:

And frankly, this is 2013. They’re not going to win the ebook market on hardware. And that goes double when you factor in the statistic that the global ereader market is shrinking, not growing.

Don’t believe me? Even what little stats I have on the German ebook market shows that I am probably correct. Last October BitKom reported that 11% of Germans read ebooks (9-ish million people). They predicted elsewhere that around a million ereaders would be sold in Germany last year (far fewer than the 12% of Germans who own a tablet). That leads to the obvious conclusion that most of those readers are not using a dedicated ebook reader. They read with an app running on a smartphone, tablet, or computer.

I would say it’s pretty clear that focusing on ereader hardware is a sub-optimal choice.

Let me know when Tolino has a plan to sell ebooks better than Amazon, because that is the point at which they might start winning. At this point all I can see is that they are making the same hardware mistake as everyone else.