Fire TV wasn’t the only gadget Amazon wanted to launch this week.

Earlier today Amazon unveiled the Amazon Dash, a handheld shopping device which combines a barcode scanner with a microphone. The Dash measures roughly 6 inches long, and it also has Wifi so it can connect to your home network.

It’s designed to be tied directly into an Amazon Prime Fresh account, enabling Amazon customers to simply scan or speak the name of a product they need. Sure, it doesn’t do much more than Amazon’s mobile shopping app, but the Dash looks to be designed to be much sturdier than your average smartphone. 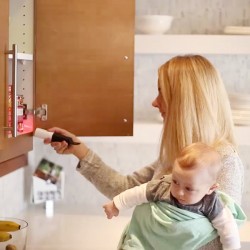 The Dash is being given away free to select Amazon Prime Fresh customers, probably with the goal of making it easier to buy stuff from Amazon. Amazon is currently accepting applications from potential Dash testers, and of course they will need to live in one of the 3 markets where the Amazon Fresh service is offered: Seattle, southern California, or San Francisco.

Accortding to the statement Amazon sent me, they’re only accepting applications from customers in the California markets, and not Seattle:

So was anyone surprised by the  voice recognition? I wasn’t, and not just because the Fire TV had voice search when it launched earlier this week.

Amazon has acquired at least 2 different voice recognition companies over the years, including Yap, a voicemail-to-text startup acquired in November 2011, and Evi, which was bought in early 2013 for its Siri-like virtual assistant.

I predicted in 2011 that Yap would show up in a retail service or product of some kind, so the only surprise is that it took two and a half years to work the bugs out.

And to be honest, I expected the tech to be integrated into a mobile shopping app, not the handheld device shown off in the video below: