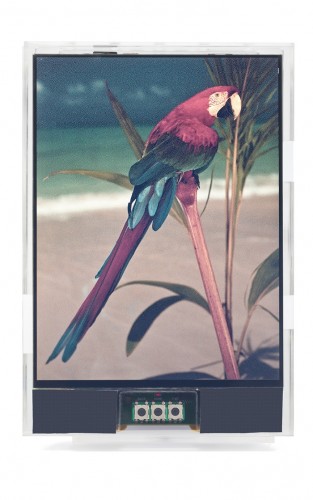 The screen tech trade show FPD International is going on right now in Japan and the attendees are in for a treat. Japan Display Inc is currently showing off a new 7″ (1024×768) LCD screen which could present a serious challenge to E-ink’s dominance of the ereader market.

The new display incorporates a couple changes in design from the norm for LCDs, resulting in a much lower power demand.

First, it forgoes the backlight found on virtually every LCD screen. As you probably know, the backlight is often the single biggest user of battery life on any tablet.  By leaving it out this screen becomes one of the more energy efficient LCD screens in one fell swoop.

But that’s not all that this screen offers, and here’s the cool part. This display also has small amounts of sRAM incorporated into each pixel.

The other reason why LCD screens are so power intensive is that the current screens have to be constantly told to display an image. Even if the screen contents don’t change, the screen still needs to be repeatedly told to display what’s on screen. That means a controller chip somewhere inside the device is constantly running and sending a signal to the screen.

This new screen gets around the power issue by using static RAM to record the screen contents on a pixel by pixel basis. The RAM doesn’t require any power to store current state of the screen, so keeping an image on the screen requires a minimum of power. It is so low power that its usage while displaying a static image is measured in milliWatts, while regular LCD screens have power demands measured in Watts.

In comparison, the new screen mentioned above draws 3 mW while displaying a static image. That means that when it’s not in heavy use (reading, for example) this screen is 800 times more efficient than the one on the iPad 2.

No details have been released about the manufacturing cost, but JDI did indicate that they were ready to produce the screen now.

Update: And here’s a video showing the new screen, courtesy of DigInfo.tv.

About time somebody got around to optimizing LCD tech for low power consumption.
Cost will depend on volume but if they can get together with Amazon they might have a deal.

Eink better get their act in gear fast.

Very interesting. If they can continue to improve the saturation we may finally see a big shake-up in the reader market… and maybe even the tablet market.

I haven’t been this excited about screen technology in a long time! I hope Kobo adapts it as I really don’t want to buy into the Kindle Game.

3mW for static images means it’s certainly usable in an ebook reader. The viewing angle looks good too. And the fast image update is also welcome.

A very interesting new technology. Now to see if the price and availability are such that a manufacturer takes it up.

[…] the past couple years JDI has debuted a low-powered LCD screen that incorporated RAM into each pixel, a high resolution 5.5″ screen (which some assumed […]

[…] higher hopes that we will one day see JDI’s solution to the LCD power problem hit the market. For the past few years Japan Display has been working on a way to add a tiny bit of RAM to each pixel in an LCD display. […]

[…] Display first showed off this tech in 2012, and the smartwatch screens launched last year used it. From what I can tell, the VivoActive […]

[…] so, I'm still thrilled. As I've reported before, what sets JDI's low-power screen tech apart is that it has RAM embedded in each pixel.  JDI calls […]