This is just a note to let you know that I am giving up on reporting the AAP’s official monthly revenue reports. They no longer provide any useful data for me to report.

For the past five plus years I have been covering the AAP’s Statshot reports under its various guises. I’d take the stats from the press release, do some basic math, and try to add some original analysis. Some months I had an interesting statement to make, other months not, but generally it was worth the effort to try.

That is not true any longer. Unfortunately, the AAP has stopped providing much in the way of data in the monthly press releases, so I can’t actually do anything original. All I can do is regurgitate the press release like GalleyCat:

Book sales were down 7.5 percent for the year as of February 2015 reaching $1.71 billion as compared to $1.85 billion for the same two-month period in 2014, according to new metrics shared by the Association of American Publishers (AAP).

Sales in Trade books for January & February were $1.01 billion, down by 4.3 percent. Childrens & Young Adult book sales were down 15.5 percent for the year. Paperback book sales were up 7.8 percent during the period. Downloaded audio books were up 33.0 percent and eBooks were down by 11.7 percent year-to-date.

I have no interest in doing that, so this month I decided to wait for other news sites to report on the stats so I could work from their reports. Sites like Publisher’s Lunch and Shelf Awareness pay for access which I lack, and while I could work from their data I cannot for the life of me understand how their stats can be reconciled with the publicly available info.

Shelf Awareness, for example, reported this: 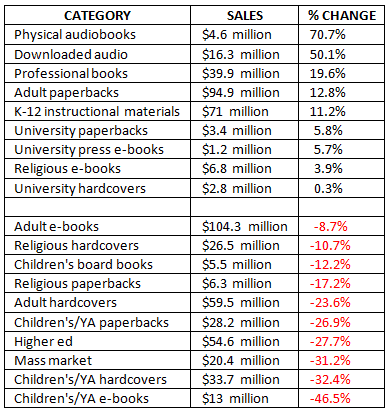 In February, total net book sales fell 10.7%, to $611.4 million, compared to February 2014, representing sales of 1,210 publishers and distributed clients as reported to the Association of American Publishers. …

While I am sure that their report makes sense in relation to SA’s past coverage, I can’t figure out how to reconcile the data with the official press release. It also does not jive with what I can see of Publishers Lunch’s article (it’s behind a paywall). (And to be completely honest, I don’t think Shelf Awareness’s data agrees with itself.)

As a result, I will be cutting back on my coverage and only report when I have real data to share. According to the press release, the AAP plans to release the charts quarterly, which means I’ll be reporting on their stats 4 times a year.