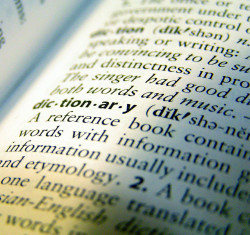 We’ve long know that English is a crazy language, with contradictory pronunciations, spellings, and usage. It’s so crazy that many people like to point out the conflicts, points of confusion, and popular misuses.

That includes Harvard cognitive scientist and linguist Steven Pinker, who explores what he sees as bad and confusing writing in his latest book, The Sense of Style.

The book is described as “a modern version of Strunk and White’s classic The Elements of Style, but one based on linguistics and updated for the 21st century”.  I learned of Pinker over at Business Insider, which earlier this week published a list of 58 words that Pinker says are frequently misused.

I’ve read the list, and in some cases he is correct. I can see how phrases are misused or misunderstood. But there are other words in that list that I would dispute are being used incorrectly so much as the common usage does not meet with Pinker’s approval (data and literally, for example).

There are also several words that are so obscure that I have believing that anyone would know them well enough to get them wrong, much less recognize the misuse. Meretricious, for example, is so obscure that the only way someone could use that would in place of meritorious is by accident and with the help of a spell checker.

Some of the better words from the list include:

As with any authoritarian decree on the proper usage of the English language, it should be taken with a grain of salt. Sure, one should try to avoid misusing words, but there are times where carefully flouting a rule can improve the story.

Rules are made to be broken, or at least that is the politically correct trend in English writing.