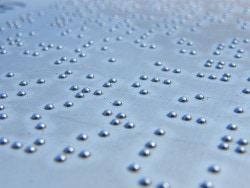 Scribd’s headline news today is the new content they’re adding to their catalog, but that’s just press release fluff. The important story happened several weeks ago, and only just crossed my desk this morning.

In late November, Scribd settled the 2014 lawsuit filed by the National Federation of the Blind and by Heidi Viens, a visually impaired reader in Vermont. The lawsuit alleged that Scribd had violated the Americans with Disabilities Act when it developed its subscription ebook service but did not make the service accessible to the blind.

Arguing that “the ADA does not apply to website operators whose goods or services are not made available at a physical location open to the public”, Scribd tried to have the case thrown out in March of this year. District Court Judge William Sessions ruled against Scribd, adding another legal precedent which showed that the ADA covered virtual spaces as well as physical spaces.

And now Scribd has settled the lawsuit. Under the terms of the settlement agreement (PDF), Scribd promises to rebuild its website to make most subscription content compatible with screen access software for the blind. This software converts text-based content, as well as the text description of images (alternate text), into Braille or spoken words.

“Lack of access to the printed word has traditionally been one of the most significant barriers faced by the blind, but electronic books and documents, when they are designed to be accessible to us, can provide access to more information than we have ever had in all of human history, leading to better education and employment outcomes, and helping us to live the lives we want, ” said Mark A. Riccobono, President of theNFB.

Scribd also agreed to make any updates to its apps for iPhone, iPad, and Android accessible to blind users, but it will only have to make the entire mobile app accessible should it rebuild the app from scratch.

That’s a less than complete victory in terms of platform, but on the plus side Scribd has to make all of the Epub ebooks accessible to the blind by the end of 2017. Considering that fixed layout Epub3 ebooks are inherently inaccessible, that is a pretty big workload, but it is ameliorated by the limitation that Scribd has to make graphic content like images, comic books, and picture books accessible only as far as the original publisher supported.

If the publisher didn’t provide a text description of a comic book page, or alternate text for an image in a book, then Scribd is not obligated to fix that book. iIt will, however, be required to provide paying subscribers text-based alternatives to PowerPoint, Excel, or PDF files hosted by Scribd on request.

In short, the NFB got the bare minimum out of Scribd: compliance with the law. It didn’t even get its legal fees reimbursed, much less win an award that some ambulance chasing attorneys demand.