Forbes wasn’t too happy about ad blocking after iOS9 was announced, and now backing up their words with actions.

Reports are coming in from Twitter, and I can confirm, that Forbes is now preventing all (most?) visitors who use an ad-block tool from viewing any articles. Instead they are shown this notice: 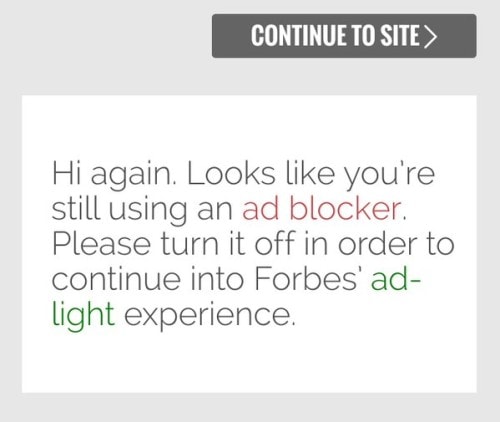 From what I can tell, the ban on ad blockers is only rolling out today, and it is not affecting all visitors. I have a report from a uBlock user, as well as one from the UK, which say that they got through just fine.

But there are other reports on Twitter which confirm the news. The general tone is a little more articulate and less expletive laden than the responses to Yahoo Mail’s ban on ad-blockers last month, but the sentiment is the same:

Add @forbes to the list of stupid publications pushing away readers. Will avoid linking to them whenever possible https://t.co/zyA0sLWEkK

@Forbes If you try to block people using an ad blocker, I’m done reading your articles. The quote interstitial was bad enough.

@tmdarling @gcluley @Forbes I refuse to use websites that use ads to block content.

@Forbes Not sure I want to turn off my #adblocker to visit yr site, coz u served malware b4 https://t.co/eZyxVNg4Eg pic.twitter.com/7UUclK0yFP 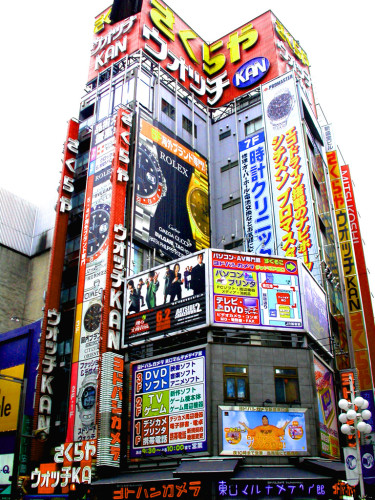 If you can’t see that last tweet, it reminds us that the Forbes website was hacked in September and used to serve up malware to unsuspecting readers. That was the second time this year that Forbes was hacked and used as an unwitting tool to distribute malware, so I’m sure you can understand why we don’t want to turn off our ad-blocking extensions.

Some 200 million people used ad blockers last year, up 40% from the year before, resulting in an estimated $22 billion in displaced (but not lost) advertising revenue, according to a study by Adobe and PageFair, an anti ad-blocking technology company.

Naturally that has many web publishers up in arms. Some, including this blog, Teleread, and other sites, have adopted a nag screen which asks visitors to turn off their ad-blocker.

On this blog only about 1% comply with the request, while around a quarter of each day’s page views are lost to ad blockers.

The nag screen is not effective, which could be why other web publishers are taking the same reader-hostile approach as Forbes.

Yahoo, for example, is blocking access to Yahoo Mail. The Washington Post has also experimented with a similar ban, and last month City AM, a London-based newspaper, started barring ad-block users from reading its articles unless they disable their ad-blockers. ITV, the UK’s top broadcaster, has been barring ad-block users since earlier this year.

And then there’s Axel Springer. In October this German media publisher kicked ad-block users off Bild.de, and it has also filed suit against a couple developers of ad-blocking extensions. Axel Springer lost one suit earlier this year, against AdBlock Plus developer Eyeo, and it sued another developer last month.