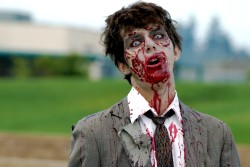 When George Romero created what is now recognized as the first modern zombie flick in 1968, he hadn’t imagined his Night of the Living Dead zombies as – well, as zombies:

To me back then, zombies were those voodoo guys who were given some sort of blowfish cocktail and became slaves. And they weren’t dead so I thought I was doing a brand new thing by raising the dead.

But since then this “new” zombie – the brain-eating, rotting, revivified corpse – has become omnipresent; a pop-culture staple. If our screens are to be believed, the zombie apocalypse is now; even Amazon’s terms of service were updated last week to cover just such a catastrophe – tongue-in-cheek, of course. The Walking Dead’s sixth mid-season premiere is now starting, coinciding with the release of Pride and Prejudice and Zombies.

Putting a zombie spin on a classic novel by Jane Austen might seem like an innovative twist. But it isn’t. In 1943 film director Jacques Tourneur partially based his I Walked With a Zombie on Charlotte Bronte’s 1847 novel Jane Eyre. I Walked With a Zombie, for all its schlock-horror aspirations, is a genuinely haunting piece of film history. But Tourneur’s zombie wasn’t the flesh-eating living dead kind (the kind that, after all, Romero never intended to be zombies). No; his was the original zombie.

So what were zombies, originally? The answer lies in the Caribbean. They weren’t endlessly-reproducing, flesh-eating ghouls. Instead, the zombie was the somewhat tragic figure of a human being maintained in a catatonic state – a soulless body – and forced to labour for whoever cast the spell over him or her. In other words, the zombie is – or was – a slave. I always find it troubling that, somewhere along the line, we forgot or refused to acknowledge this and have replaced the suffering slave with the figure of a mindless carnivore – one that reproduces, virus-like, with a bite.

There is no one singular zombie tradition from the Caribbean. The word “zombie” itself has a number of possible origins, with similar words being found all across West Africa – which of course, is precisely where the slaves came from – and meaning anything from “devil” to “spirit” to “Creator God” (Congolese “Nzambi”). There is even a word in the indigenous Caribbean Arawak language – “zemi” – which refers to an “ancestral spirit” and which has also been cited as the etymological source. And with the fluidity that characterises folklore and shifting local traditions, there are different kinds of zombie too, and the word can sometimes be used to suggest a malevolent spirit or ghost, not unlike the locally-terryifing Jamaican “duppy”.

But the most resonant tradition of the zombie is one who has been conjured into a soulless state and forced to labour. Crucially, the zombie has no memory of who he was previously, nor understanding of what he has become, and is whipped and exploited cruelly, and fed only on meagre rations.

An even earlier rendering of the filmic zombie came in the shape of White Zombie in 1932. Starring veteran horror actor Bela Lugosi, the film largely falls flat but – to me at least – was notable for a single scene set inside a sugar mill. In this scene, slaves – or zombies, we’re not sure – work the mill. Nobody here is staggering about in varying degrees of decomposition or attempting to feast on brains; they simply turn the machinery, around, and around, and around. It’s an uncanny, deadening scene. Are they zombies, or slaves? Either way, they are mindless, dead-but-alive; slaves who do not remember who they were; who do not know their names; who are unconscious; who exist only for exploitation and labour.

Because here’s the thing: in a direct inversion of our now-familiar flesh-eating zombie narrative, the Haitian zombie is not a predator but is afraid of people. His docile, cringing subjection is absolute, but there is one proviso; you must never feed him salt, for if you do, he will remember. He will remember who he is and who he was and everything that has been done to him – and then he will slave no more. I recounted this once to a classroom full of students and one remarked – with great perspicacity – that to taste salt was akin to tasting tears.

We can be pretty sure that the zombie is not a wholly Caribbean invention, but arrived with the slaves from Africa; because we must remember that forms of slavery were systemic within Africa too, although their impact and supporting ideologies shifted dramatically – and devastatingly – once transported west. It might be worth noting that Jane Austen herself lived and wrote during the peak of British abolitionist fervour, which perhaps makes it all the more ironic that zombies should crop up in a version of Pride and Prejudice. But this is not a rant about “cultural appropriation” or “cultural erasure” – although conceivably it could be, either or both – it’s simply a call to memory, which is precisely what the zombie does not have.

It’s a call to memory because the zombie – the actual zombie – reminds us of something very important. It reminds us to remember – who we are, and where we came from, and how we came to be – individually and collectively – especially for those of us whose personal and community histories are caught up in the blanketing fog of cultural amnesia. The zombie reminds us to taste salt.

View posts by Victoria Anderson
Victoria is currently developing a project that explores the ways that technologies impact on culture-as-folklore, both as a repository of human reflections and as an evolving set of practices. Her work navigates areas that touch on race, class and gender in the context of self-articulation, but is primarily interested in the analysis and aetiology of dominant cultural narratives. For many years she was a frustrated novelist, and as a consequence has given up novels altogether and now only reads menus, instruction manuals and Facebook. She also reads emails, so do feel free to get in touch.