Earlier this month Sony officially unveiled a new research and development program called Future Lab, and they were at SxSW a couple weeks back to show off their first concept designs. In addition to a smart necklace, Sony also demoed a projector concept that turned a table or other flat horizontal surface into an interactive screen.

Sony called it an interactive tabletop, and as you can see in the demo video users could use the prototype projector system to interact with a copy of Alice’s Adventures in Wonderland, and other objects.

After the book was placed under the projector, the sensors recognized it and created virtual animations which the users could lead around the table. The system also let users interact with a teacup, and a deck of cards.

The Verge got a photo of the projector itself, and you can see it at the end of this post.

It looks nifty, but with Kinect and other motion-sensing devices now available on store shelves, Minority Report style virtual interfaces are old hat.

There’s very little here which is new; Fujitsu demoed a similar concept back in 2013, and so did Disney. Also, Sony showed off an unrelated tabletop project earlier this year. In fact, if we go further back we can find videos showing a much simpler version of the same idea in 2010, and earlier.

And here we are in 2016, where this idea is still very much an idea for the drawing board, rather than the store shelf.

Why do you suppose that is the case? 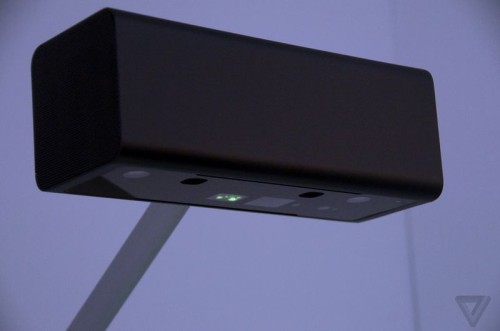 If you know of a commercial product that can do this, please leave a comment.