When I broke the news on the XO Infinity laptop from One Education (OLPC Australia) last spring, it featured a modular design where you could replace the CPU, battery, screen, storage, etc.

You could have thought of the design we saw last year as the Project Ara for educational laptops, but you wouldn’t get that impression from the Infinity laptop  which just went up for pre-order.

One Education is sending out emails this morning with the news that you can pre-order an Infinity laptop, only instead of the modular design teased last year, this laptop is a rather ordinary looking two-in-one design with a green shell. 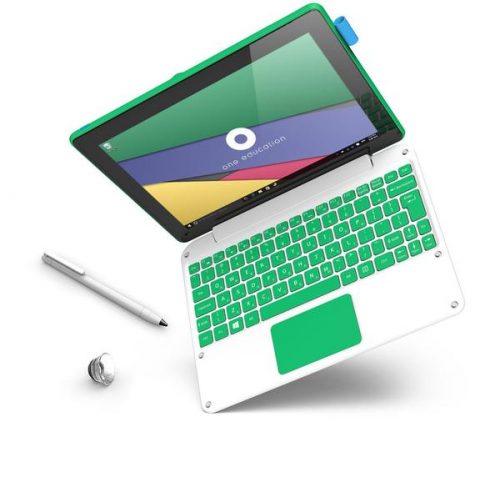 The Infinity is now a 10″ laptop which runs Windows 10 on a quad-core 1.9GHz Atom CPU with 2GB RAM and 64GB internal storage.

Gone are the options for Android and Sugar OS. The laptop has also lost all of its modules, and replaced the promise of upgradability with the usual mix of ports, card slots, and a couple cameras (2MP and 5MP).

The Infinity costs $230, and is expected to ship in August.

If you’re wondering what the bleep happened to the original design, the problem was that this project never had the engineering team it needed and it never had broad support from the industry.

As you may recall, Project Ara had the financial backing of Google and support from industry standards groups as well as Intel, Toshiba, Qualcomm, Rockchip, Nvidia, Marvell, Sennheiser (audio), Innolux (screens), and a bunch of smaller companies including smartphone makers.

In comparison, the Infinity laptop did not even have the support of Google or Intel, two tech giants which have an immediate and direct interest in edtech as well as the engineering teams to make this idea a reality.

I’m sure One Education had great engineers, but this was a ridiculously complex project which required the backing of numerous tech experts in a variety of fields. That lack of support is why this project has (at best) stalled at an incomplete state and why One Education instead launched a substitute product.

There’s no word on when or if One Education will ever launch the promised modular laptop. I have queried them, and I will update this post with their response.

Edit: I have been told that the idea “has been parked for now. The market and manufacturing industries to support it aren’t just there yet!”