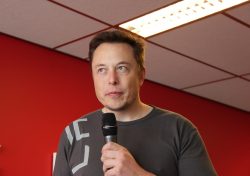 Elon Musk is being touted by some as the next Oprah Winfrey after a book he recommended rapidly vanishes from store shelves.

Bloomberg reports that after Musk mentioned an out of print biography in an interview earlier this week, all existing copies were snapped up online as the price went through the roof:

At the conclusion of a press event, I asked Musk, an avid reader, what he’s been into lately. He started to demur, then checked himself. “Actually, I’m reading a book calledTwelve Against the Gods, by Bolitho,” he said. “It’s really quite good.”

Musk being Musk, news of his latest read sent the price of the few copies out there up 1500 percent.

What a pick. Musk has wide-ranging tastes, from J.R.R. Tolkien’s Lord of the Rings to manuals about rocket propellants. He names SpaceX’s drone ships after sentient spacecraft in science fiction novels by Ian Banks and taught himself about rocket propulsion through books he picked up along the way.

Twelve Against the Gods: The Story of Adventure is an obscure, out-of-print treatise by William Bolitho, published in 1929. Bolitho, a South African journalist and friend of Ernest Hemingway, wrote about 12 famous “adventurers”—from Alexander the Great to U.S. President Woodrow Wilson—who fought against the conventions of their times, for better or for worse.

Curious, I picked up a used copy on Amazon.com on Tuesday night for $6.35; there were at least a dozen cheap copies to choose from. By morning, the price of a paperback had jumped to $99.99. As I write this, there are no more copies available on Amazon, though a few are left on AbeBooks.com.

There are no digital copies, unfortunately, but that will likely change quickly. The Open Library has a copy, and so does the HathiTrust (search-only, alas), but more importantly the HaithiTrust notes that the author died in 1930.

His works are out of copyright in much of the world, and at least one British publisher took advantage and released a new edition in 2003 (I don’t think that’s in print any more, either).

This title is still in copyright in the US, however; the copyright was renewed shortly before the book was reprinted in the 1950s.

If you have a copy, could you do us a favor and digitize it before uploading it to Project Gutenberg Australia?