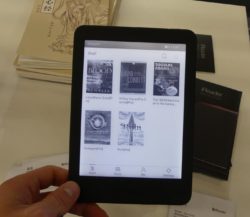 iReader is chiefly known outside of China for its apps for Android, iPhone, and iPad, but  it claims a considerably larger presence in China.

Lesen.net caught up iReader at the Frankfurt Book Fair, and they report that iReader has sold over a million ereaders in China, and that they have over over 500 million people using the iReader iOS and Android apps.

iReader was showing off one of their ereaders at the FBF. It is called the Ireader 2 in the video, but from what I can tell on the IReader website the correct name is the iReader Plus.

This is the only ereader which iReader is promoting on its site right now, and it sports a 6.8″ screen with frontlight and touchscreen. Under the hood the Plus has a 1GHz Freescale CPU, 8GB storage, and Wifi & BT – but no audio.

Again, iReader claims to have sold a million ereaders, but that is rather hard to believe given that I had never heard of their hardware. I obsess over obscure ebook readers, and I hang out at MobileRead Forums with others who share my obsession, and I can’t find any references to iReader devices.

That makes me doubt that iReader has actually sold a million units.

What do you think of the device?