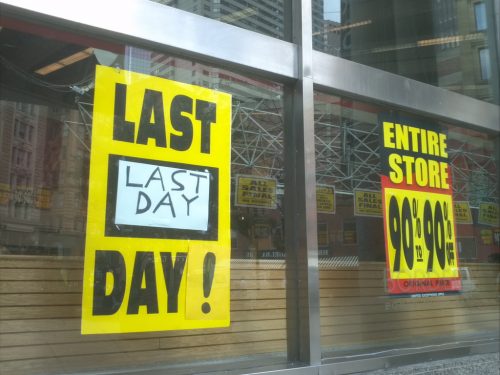 After Circuit City cut its most expensive sales people in March 2007, the company lasted a mere 19 months and 13 days before filing for Chapter 11 bankruptcy and liquidating its remaining assets.

This does not bode well for B&N.

Yesterday Barnes & Noble shook the business world when they fired an unknown number of experienced employees. The initial report said B&N had fired “lead cashiers, digital leads, and other experienced workers”, but what that report missed – and why this was worth bringing up a day later – was that B&N also fired nearly all of its receiving managers in what current and ex-employees are calling Bloody Monday.

I have heard from two independent sources, including:

Barnes and Noble just fires almost every single receiving manager as a cost cutting measure. I worked with them for over 17 years and my weekly Storytimes are massively popular. And in the blink of an eye, I'm fired.

When B&N fires a digital sales lead, it means they’ll sell fewer Nooks. This is no big deal given how B&N’s digital revenues have fallen since 2013.

When B&N fires a head cashier, it means you’re in for longer waits at the register.

But when B&N fires its receiving managers, it means that B&N won’t have the merchandise to sell you because the person who was responsible for making sure shelves get stocked does not work there any more.

The guy who gets all the deliveries, unboxed them, sorts them, and like a million other things that keeps the store running. My manager would say that I was the most important person in the store, that without me there was no product. Ha!

To put it another way, the receiving manager is the one person after the store manager most capable of going out and opening (or taking over) a bookstore.

Barnes & Noble may boast that they are going to save $40 million annually, but that savings comes at the expense of the institutional knowledge required to run the store.

Last month Barnes & Noble reported that revenues for the 2017 holiday season fell 6.4% compared to the same period a year ago, to $953 million. Online sales dropped 4.5%, while same-store sales fell 6.4%.

We have a fairly healthy economy right now, and everyone from Walmart to Amazon is hiring. This means Barnes & Noble isn’t going to be able to find the experienced people they need to turn the company around.

My over-under for B&N to announce bankruptcy proceedings is next January.

What is your take?