We all know Kobo has a new ereader coming, but we don’t know its size or name. Now it looks like Walmart may have leaked the next Kobo ereader.

Walmart is promoting its new ebookstore with full-page newspaper adverts in Sunday’s paper, and someone over at MobileRead noticed that the advert, which is posted above, contains what looks like a rather large ereader.

The consensus over at Mobileread is that this is most likely just a prop. While I think it would be cool for this to be the next Kobo, I have to agree with the consensus.

Kobo is being too careful right now for them to have handed over their next ereader for Walmart to use in a photo shoot. Remember, they made sure the model name was redacted from the FCC paperwork. A company taking pains like that would not let an early model leave the office for a photo shoot.

And sure, there is some speculation that this is the new model, and that it will be released in the next few weeks, but that is all coming from a blog known for inventing rumors. And besides, most of what they made up about the next Kobo is flatly contradicted by the FCC paperwork (they couldn’t even be bothered to make their lies plausible, LOL!)

P.S. Here’s a photo of the complete advert: 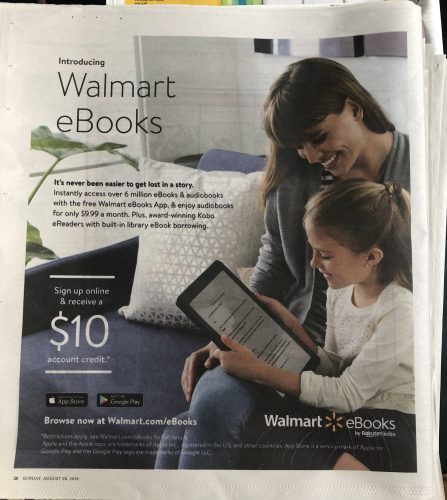