AAP Reports eBook Sales Up in the First Part of 2014

The American Association of Publishers posted their monthly snapshot report of the state of the US trade publishing industry today, and the news is generally good.

The 1,200 US publishers who supply data to the AAP reported that their collected revenues reached $2.6 billion in the first 5 months of the year, up 3.9% from $2.55 billion last year.

As you can see in the chart below, the adult segment was down 3.6%, religious presses dropped a fraction of a percent,  the kid’s/YA segment grew by 30.1% (don’t you just love those movie inspired market fluctuations?).

In terms of formats, ebooks were one of the two bright spots in this report. The AAP says ebook sales totaled $670 million, up 7% from $626 million last year. Surprisingly, sales of paperback books also increased by 6.3%, while hardback books dropped a fraction of a percent. (Audiobook sales continued their steady incline, growing by 25.3%.)

eBook growth has picked up since the last AAP report, which covered the first 3 months of the year, while hardback sales have dropped. This likely reflects general market fluctuations rather than (as I would hope) a sign of serious growth.

Here’s all the sales data I received; note that there is a typo in the first chart. 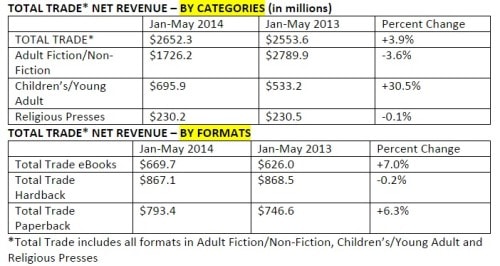