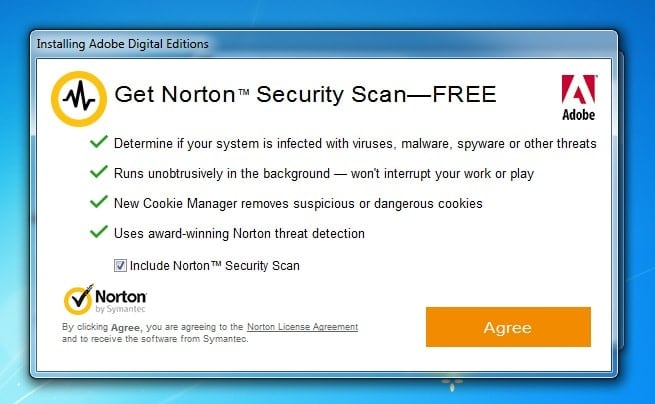 Adobe isn’t making much money off of its Epub-reading apps, but they’ve found a new way to cash in. A reader has tipped me to the news that Adobe is now bundling Norton Security Scan with the Adobe Digital Editions 4 installer file.

Unsuspecting users who only want to read an ebook are now prompted to install an unnecessary piece of bloatware. And to make matters worse, the checkbox to approve the installation comes pre-checked: 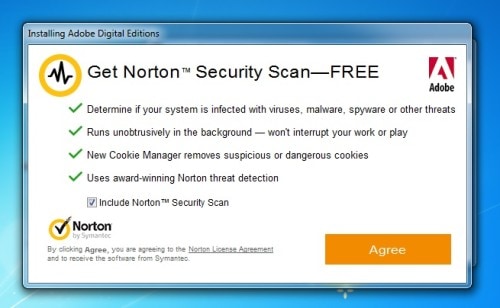 I’ve tested this myself, and I can report that the bloatware is bundled into the same version of Adobe DE 4.0.3 that was released in February. According to user reports, Adobe only added the spam install file some time in early July.

This kind of nonsense is usually the hallmark of a slimy company desperate to make a buck any way it can. Sourceforge, for example,  has lately been on the receiving end of a lot of grief lately for the way that has been seizing control of software projects hosted on the site and bundling said software into Sourceforge’s own spam-encrusted installers.

What Adobe is now doing with Adobe DE isn’t quite as bad, but it is in the same ballpark.

The Java Plug-in for browser does this too. It is annoying, but at least the app is free.

Two big difference between this and Java.

2) Norton isn’t just the Ask toolbar, this is low-level, system-resource-taxing, and hard-to-remove software that will (I assume) try to get people to pay for it when the free period ends.

They’ve done the same for a long time now with the Flash Player for PC download.

Considering Flash and Adobe’s PDF readers have been major 0-day attack vectors for years, it makes sense for a company so bad at security to encourage anyone using their products to have antivirus installed. But it’s still scummy the option is auto-checked, as well as extremely unfortunate that they’d partner with Norton and McAfee, both of whom produce products that are often worse than what they’re supposed to prevent.

I didn’t know, thanks. I’ve never seen the bloatware when I’ve updated Flash. But then again it was so long ago that I might not have noticed.

I seem to remember it’s been this way for long enough that I know now to look extra to make sure I’ve unchecked all the boxes – on all of these updates.

Not with Adobe DE. Thanks to Adobe’s spying last year, I watch that app closely. The version I installed in February did not have this bloatware.

Maybe it’s Acrobat, which seems to update constantly – I rarely have updates from the Reader. But I know I’ve also been saddled with that stupid Ask engine (Flash? Java?) a couple of times when I forgot to look closely.

And running the installer silently with /s is no longer silent as the bundle install still pops up,

will look hard at another way to read e-books

Adobe really makes enterprise users angry on this.
We have our own AV.
And we want simply deploy ADE silently without the pop up windows asking end users if they want Norton.