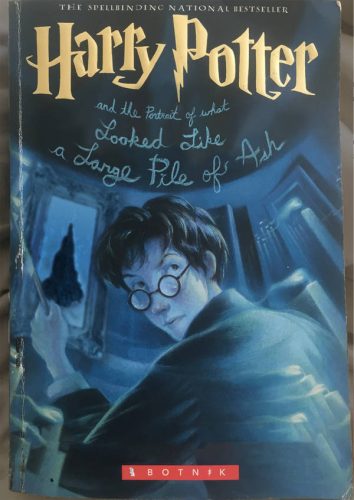 James Patterson has to keep finding new co-authors in order to continue publishing so many thrillers every year, but given the speed that AI is improving he may soon be able to do away with the need for collaborators.

Take Harry Potter, for example. A team of engineers at Botnik just published part of a Harry Potter fanfic that was written by an AI.

The story is only four-ish pages long, but if you didn’t know better you might think you were reading the work of a person:

The castle grounds snarled with a wave of magically magnified wind. The sky outside was a great black ceiling, which was full of blood. The only sounds drifting from Hagrid’s hut were the disdainful shrieks of his own furniture. Magic: it was something that Harry Potter thought was very good.

Leathery sheets of rain lashed at Harry’s ghost as he walked across the grounds towards the castle. Ron was standing there and doing a kind of frenzied tap dance. He saw Harry and immediately began to eat Hermione’s family.

I don’t know about you, but I’ve read worse commercially published fiction.

You can read more on the Botnik website, and once you’re done giggling you might want to check out the autocomplete bots that Botnik made.

Botnik has uploaded a couple (one, two) of the "predictive keyboards" they used to write the fanfic. The bots work a lot like the autocomplete on your phone, and will suggest ways to complete what ever sentence you type in.

They’re a lot of fun to play with, but you might have to wait; Botnik’s servers are struggling with the load.

As a matter of fact, this is at least the second AI-authored Harry Potter fanfic. The last one was revealed in July, and was developed by a researcher by the name of Janelle Shane.

Shane worked from fanfic rather than the original novels, so like the source material her bots tended towards shipping Harry Potter characters rather than telling a longer story. Here’s a sample of the output:

The Perfect Party by iamisaac
Draco has been left alone, and Ginny confused must learn and who has his best friend. They were breathed by a love that didn’t become his grounds and the flowers begin.

As Shane explained, "Those familiar with Harry Potter fan fiction will not be surprised to learn that the neural network really likes to generate ships; pretty much every combination of characters is represented (some of the more unusual combinations being 'The Snow/Voldemort', 'The Ministry/Draco Malfoy', and 'Voldemort/Random Quidditch Child')."

Which do you think is better, Botnik’s story or Shane’s shipping bots?

Years ago, there was an April Fool’s Day article about a computer program that could write novels. What shocked me in the trade press reaction was the unhappiness of many editors that this was not true, and they couldn’t do away with those annoying, pesky writers. As of now, we pesky writers are safe because the dreck generated by these bots makes new writers look like Hemingway and Shakespeare. I’m a teacher of new writers so I know.

[…] Bloomberg looks at the startup that created the Harry Potter fanfic-writing bot.  […]