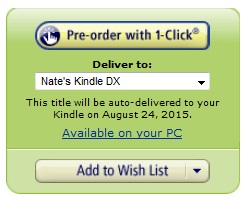 One thing that has always frustrated me about publishers is the long delay between when a book is done and when it is finally released. For example, the latest Vorkosigan novel (by Lois McMasters Bujold) was handed to Baen about 18 months before it hit the shelves.

I hate that, and I hate it even more when only the ebook is delayed.

Tyrus Books is taking this scheduling to an extreme. They now have an ebook set to come out in 2015 even though it was originally published in paper back in 1989.

A delay of 26 years between the print and digital release is something of  record. Perhaps this is a novel experiment (hah, see what I did there) to determine exactly how long readers will wait? If so, I think this data point should be removed from the test group. As  rule, I don’t believe you should check for a delay that is long enough for your test subjects to become grandparents.

Actually, I’m kidding. This was probably an error on the part of Tyrus Books.  No one’s really going to schedule an ebook for decades  years after the release of the paperback. I’d bet this was just  typo, and that it will be fixed soon.

But it is still a funny sight.