Never one to pass up an opportunity to make pr hay at the expense of their competition, Apple started a new promotion yesterday in the iBookstore which featured George Orwell. Re/code noticed the change, and they posted a screenshot: 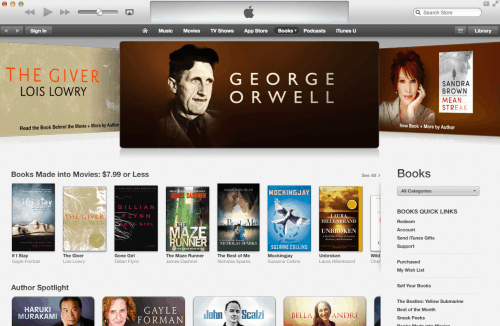 DBW did a little digging and showed that Orwell was the only non-contemporary author to be featured, making it clear that he was singled out for a special reason.

As you probably recall (and as many of us are trying to ignore), a few weeks ago Amazon was taken to task for misquoting Orwell in their open letter to readers and authors.

In talking about the then new paperback books, Orwell said that they were a great value for readers and that if publishers had any sense, they would combine against them and suppress them". Many people criticized Amazon for taking an ironic statement literally, and using it to suggest that Orwell was advocating collusion.

The funny thing is, he might actually have been arguing for collusion. While I can see how that sentence may have been meant ironically, when you read the entire statement it becomes less clear.

A few days ago Hugh Howey posted the original statement that Amazon quoted, and it’s clear that he thinks cheap paperback books are bad for the publishing industry – an argument quite similar to the arguments made by the Agency publishers about cheap ebooks (and we know how that ended up).

I’ve posted the complete statement below. As I read it again today I think Orwell was being ironic when he called cheap paperbacks a good value – a detail which some missed when this story broke a few weeks ago.

I don’t think he liked them, but I am going to post the entire statement and let you make up your mind. (To be perfectly honest, parsing this statement requires literary analysis, so there are actually several right answers.)

The Penguin books are splendid value for sixpence, so splendid that if the other publishers had any sense they would combine against them and suppress them. It is, of course, a great mistake to imagine that cheap books are good for the book trade. Actually it is just the other way about. If you have, for instance, five shillings to spend and the normal price of a hook is half-a-crown, you are quite likely to spend your whole five shillings on two books. But if books are sixpence each you are not going to buy ten of them. because you don’t want as many as ten: your saturation point will have been reached long before that.

Probably you will buy three sixpenny books and spend the rest of your five shillings on seats at the “movies.” Hence the cheaper books become, the less money is spent on books. This is an advantage from the reader’s point of view and doesn`t hurt trade as a whole, but for the publisher, the compositor, the author, and the bookseller it is a disaster ….

If the other publishers follow suit, the result may be a flock of cheap reprints that will cripple the lending libraries (the novelist’s foster-mother) and check the output of new novels. This would be a fine thing for literature, but it would be at very bad thing for trade, and when you have to choose between art and money – well, finish it for yourself.

My local Borders store isn’t closing, is yours? (map)

US eBook Sales Were Up in the First Half of 2012

I don’t know how he meant his statement to be taken, but I have issue with "the cheaper books become, the less money is spent on books." Avid readers take the money saved on cheap books & buy more books. To an avid reader there is no such thing as a saturation point. It’s my impression he did not like cheap books & Amazon used the quote correctly.

Amazon did in fact use it correctly:
http://finance.yahoo.com/news/yes–virginia–george-orwell-really-hated-paperback-books-180018841.html;_ylt=AwrSyCP.H_JTlCkA8R.TmYlQ

I still think he was being ironic.

But even so, had Amazon referenced the entire quote they could have used it to say that he advocated a response to cheap paperbacks which was similar to what the Agency publishers did. Amazon could have said that publishers took his ironic suggestion seriously.

I was going to list a bunch of links to items entitled "Collusion" on Amazon with the suggestion that Amazon could put them on their front page but it’s been a long day so I won’t.

LOL It took me a while but I finally got your joke.